As we look back and reflect on the highs and lows of this year, here are ten of HRC’s 2018 resources to guide the work ahead.

2018 has been a long, hard-fought year for our community. From this administration’s continued attacks on asylum seekers, inclusive health care access, its attempts to erase transgender people to the obstacles LGBTQ people still face in their everyday lives, it has at times felt like an endless battle.

But this year has also seen stories of amazing resilience and progress -- including a historic victory for transgender equality in Massachusetts and a growing number of legislators, advocates and allies speaking out to protect LGBTQ youth from dangerous and debunked “conversion therapy.” Transgender trailblazers like the cast and crew of Pose and Supergirl’s Nicole Maines bring important stories and visibility into homes around the world.

As we look back and reflect on the highs and lows of this year and celebrate the pro-equality majority that will soon be sworn into the House of Representatives, here are ten of HRC’s 2018 resources to guide the work ahead:

1. A National Epidemic: Fatal Anti-Transgender Violence in America in 2018 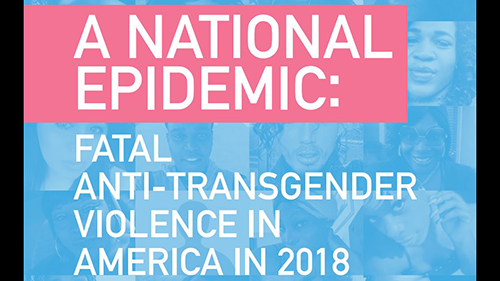 In honor of Transgender Day of Remembrance, HRC Foundation released a heartbreaking report honoring the more than 20 transgender and gender-expansive people killed in 2018 (at the time of publication). It also details the contributing and motivating factors that lead to this tragic violence, and outlines how we all can take concrete steps to end this crisis. In life, each of the individuals memorialized in this report went to extraordinary lengths to live authentically as who they were. In death, we must honor their truth with bravery and action.

In conjunction with the 25th anniversary of the Family and Medical Leave Act, HRC Foundation released a groundbreaking report detailing the results of its nationwide survey of LGBTQ people that reveals an urgent need for inclusive paid family and medical leave. More than 5,400 LGBTQ people from all 50 states responded to HRC’s 2018 U.S. LGBTQ Paid Leave Survey, the largest and most comprehensive ever of its kind. HRC Foundation also released two subsequent breakout reports from this survey highlighting the unique needs of transgender and non-binary workers and LGBTQ working people of color. 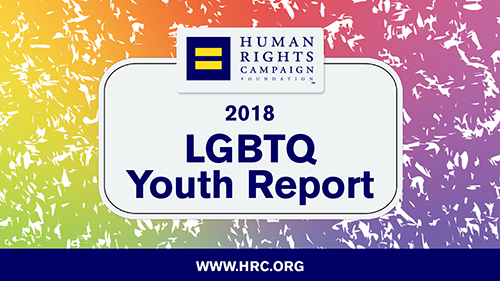 HRC Foundation partnered with the University of Connecticut to conduct an innovative survey of more than 12,000 LGBTQ youth, ranging in age from 13 to 17, and from all 50 states and Washington D.C. The largest-of-its-kind survey revealed in distressing detail the persistent challenges so many of them face going about their daily lives. It found that these teenagers are not only experiencing heartbreaking levels of stress, anxiety and rejection, but also overwhelmingly feel unsafe in their own school classrooms. Survey participants also made it crystal clear that supportive families and inclusive schools are key to their success and well-being. HRC Foundation released two sub-reports later in the year, highlighting the unique issues facing both Latinx LGBTQ youth as well as gender-expansive youth respondents, with additional breakouts of the data to come in 2019.

4. All Children - All Families Program resources 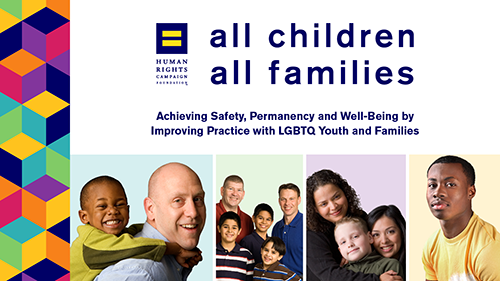 In June, HRC Foundation’s All Children - All Families program unveiled groundbreaking new resources to guide child welfare agencies in better serving the more than 430,000 children and young people in foster care. The resources include assessment tools and a comprehensive webinar series on how best to serve LGBTQ youth. With these tools, agencies can assess their policies and practices around working with young people and prospective parents.

5. Coming Home to Evangelicalism and to Self 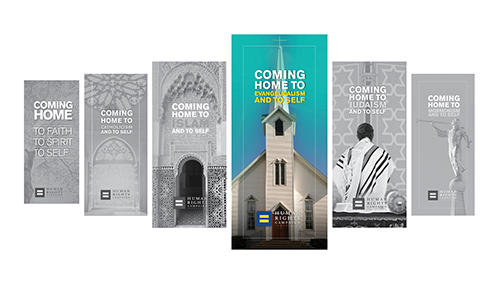 This guide, latest in HRC Foundation's ‘Coming Home’ series, is aimed at LGBTQ Evangelicals who are on the journey toward living fully in their sexual orientation, gender identity and expression and in their faith and its traditions. The guide offers general, overarching insights and suggestions that draw on a wide variety of evangelical voices. The hope is always to spark new ideas, new dialogue and new courage. 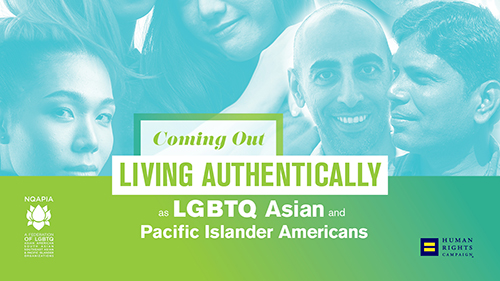 In partnership with the National Queer Asian Pacific Islander Alliance, HRC Foundation released a coming out resource for Asian and Pacific Islander (API) Americans, a valuable conversation starter for LGBTQ APIs, their families and their communities. Although, there is no universal coming out experience, this resource aims to offer support and guidance for members of this diverse community. For instance, Some LGBTQ API Americans raised in religious communities must reconcile themselves with traditions and teachings that may condemn LGBTQ identities. Language differences can also make it difficult to identify relevant or relatable resources, support and role models. 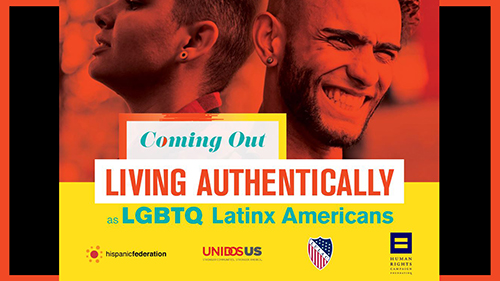 HRC Foundation, in partnership with the Hispanic Federation, League of United Latin American Citizens and UnidosUS, released Coming Out: Living Authentically as LGBTQ Latinx Americans to aid LGBTQ Latinx Americans in navigating the intersectional challenges when coming out. This resource offers support for those finding their way across multiple languages, cultures, religious affiliation, ethnicity, nationality and LGBTQ identities.

8. HIV 101: a Guide to HIV Prevention, Treatment, and Care on College and University Campuses 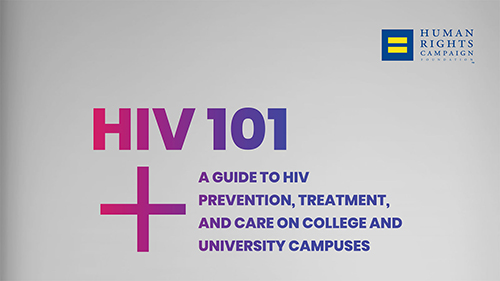 This comprehensive guide outlines many of the critical steps higher educational institutions can take to improve student health and wellbeing. As a group, college students experience heightened risk factors that can lead to contracting HIV, including engaging in high-risk sexual behavior and experimenting with drugs or alcohol. This resource details ways in which administrators, staff and even students themselves can foster a campus environment to support those living with HIV and help mitigate this national public health crisis. 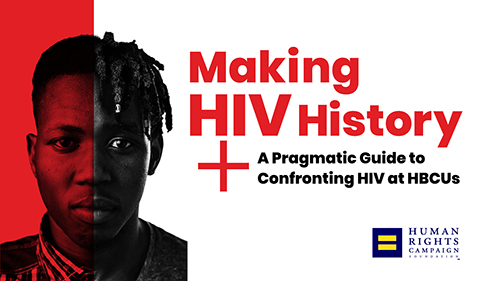 Despite declining HIV infection rates in the U.S., college-aged and Black Americans continue to be at a higher risk of acquiring HIV than the general population. In 2015, youth and young adults ages 13- to 24-years-old represented more than one in five new HIV diagnoses in America. Eighty percent of those diagnoses occurred in people ages 20- to 24-years-old. Among youth diagnosed with HIV in 2015, 55 percent were gay or bisexual Black men. This comprehensive guide for HBCU administrators, staff and students outlines many of the critical steps higher educational institutions can take to help achieve an HIV-free generation.

10. Play to Win: Improving the Lives of LGBTQ Youth Through Sport 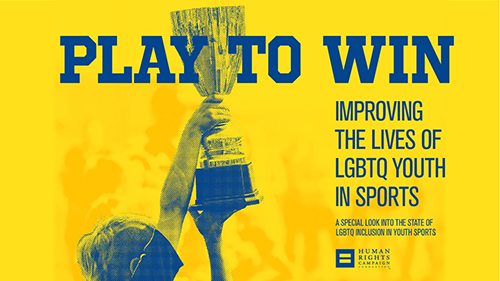 For millions of Americans, sport embodies our ideals of equality, fairness, perseverance, discipline and integrity. But in too many places, sports are not always a safe or affirming space for aspiring LGBTQ athletes. HRC’s “Play to Win”, “Equality in the Stands” and “Be a CHAMPION” resources aim to empower LGBTQ people and allies on the field, court or track, in the ring, on the ice or in the stands.

To view more resources HRC published in the past year, visit hrc.org/resources.

Remembering Cris Blehar, Trans Woman Who Was “An Amazing Mother And A Wonderful Person”