119 Number of child welfare organizations that are partnering with HRC Foundation’s All Children - All Families in 2021, up 19% from a year ago.

This is just one of the highlights of the 2021 Change-Makers report, which celebrates the LGBTQ+ inclusion efforts of child welfare organizations across the country. The HRC Foundation’s All Children - All Families works with these agencies to improve the services they provide to the LGBTQ+ community, including children in foster care, 1 in 3 of whom are LGBTQ+, and prospective foster and adoptive parents. These organizations serve more than 1 million clients annually in 35 states and employ more than 24,000 employees.

“The third edition of our Change-Makers report shows that, despite the many hardships of the last year, more organizations than ever before are working alongside the Human Rights Campaign Foundation to make impactful change for the LGBTQ+ youth and families they serve,” said Alison Delpercio, director of HRC Foundation’s All Children - All Families. “This year’s participants also demonstrated a growing commitment to intersectionality and ensuring organizational policies and practices do not reinforce the same systems of oppression that put youth and families at risk in the first place.”

ACAF provides educational resources, training and technical assistance on LGBTQ+ inclusion for child welfare systems. Since 2007, ACAF has been the go-to resource for agencies looking to truly welcome and affirm LGBTQ+ prospective parents and transform their service delivery for LGBTQ+ youth in out-of-home care. Learn more at hrc.org/acaf

“It’s fun to be around a community who accepts you for who you are and it just makes the sport so much better.”

There is an alarming amount of disinformation about trans and non-binary youth and sports. To dispel these myths, we partnered with cut.com and Chris Mosier to produce a video called Kids Meet a Trans Athlete ahead of the Tokyo 2020 Olympics. Mosier talked with the kids about how valuable sports are to kids’ development and the impact of anti-trans sports bans that were introduced in state legislatures across the country this year. 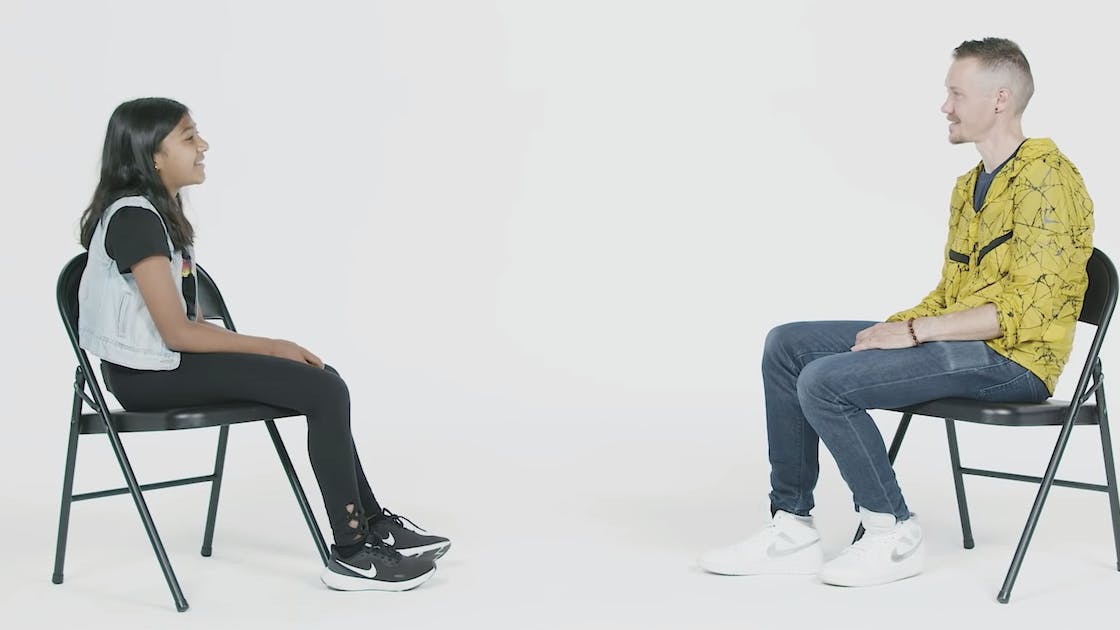 The video offers easy-to-understand language that can help foster conversations with people of any age to help them understand why bills like the ones we are fighting against hurt trans and non-binary youth. People deserve to participate in sports that are consistent with their gender identity — period.

Get loud, get visible and spread awareness on behalf of transgender and non-binary people. Join us at hrc.org/CountMeIn.

At Time to THRIVE, the Human Rights Campaign Foundation, in partnership with the National Education Association and the American Counseling Association, aims to engage a broad audience of youth-serving professionals on building cultural humility around LGBTQ+ identities using a strong intersectional approach. Time to THRIVE offers the opportunity for youth-serving professionals to lean into conversations on the relationship of multiple aspects of identities.

Workshops and panels look at the intersections of LGBTQ+ identities with other barriers, such as racism, ableism, classism, sexism, and transphobia, to understand the ways they impact LGBTQ+ youth in a wide range of settings. This serves to create spaces in which all LGBTQ+ youth are affirmed, supported, and have an equitable opportunity to THRIVE.

The conference will be virtual and will run February 8-10, 2022. Register today.

Registration is now open for the Human Rights Campaign Foundation’s Connecting Communities: A National LGBTQ+ Liaison Summit, which will be held virtually from Oct. 19 to Oct. 21, 2021.

This national summit is a space for LGBTQ+ municipal liaisons and allied local officials from across the country to connect with one another and learn how to engage the tools of local government to address the most pressing needs of their LGBTQ+ communities.

This virtual summit will offer workshops and panel discussions on a wide array of topics, including equity and intersectionality, local non-discrimination laws and policies, the epidemic of fatal violence against transgender and gender non-conforming people, health disparities in the LGBTQ+ community, and providing municipal services to support particularly vulnerable LGBTQ+ residents. In addition, attendees will be provided with opportunities to learn from one another by sharing challenges, solutions and best practices.

In an effort to help get as many people vaccinated against COVID-19 as possible, the Human Rights Campaign Foundation hosted seven pop-up vaccination clinics all over the country this summer.

The effort was in partnership with the HRC Foundation’s Religion & Faith program, the White House Office of Public Engagement and the Washington National Cathedral. Following a kickoff event, the HRC Foundation leveraged relationships with local LGBTQ-affirming faith communities and provided support to local health departments and pharmacies in setting up the seven mobile vaccination sites and public education events to help our communities get fully vaccinated.

Recent studies have estimated that 92% of America’s LGBTQ+ population has been vaccinated. We’re proud to have been part of that effort.

The Human Rights Campaign is proud to announce the historic appointment of our very own Tori Cooper to the Presidential Advisory Council on HIV/AIDS. Cooper is the first out Black transgender woman appointed to serve.

“I could not be more proud to serve on the Presidential Advisory Council on HIV/AIDS. We are honored and excited that the Biden-Harris administration is recognizing the importance of including transgender people, especially Black transgender women, in this life-saving work,” said Cooper, director for community engagement for HRC Foundation’s Transgender Justice Initiative “I am eager to advocate on behalf of all transgender and non-binary people, including all trans and non-binary people who are living with HIV. This work has never been more critical, and I look forward to working with my colleagues on PACHA to help bring an end to the HIV epidemic."

We launched our TikTok account on June 1st to celebrate Pride Month. We’re excited to be on the platform and have a chance to cover topics such as coming out to your doctor, the Equality Act and BIPOC Mental Health Month in fun, new ways.

We Are Suing Tennessee and Texas

In response to anti-trans legislation that has been enacted in states this year, the Human Rights Campaign Foundation is representing a total of three families in litigation cases in Tennessee and Florida.

In Tennessee, joined by the law firm of Linklaters, we filed a federal civil rights lawsuit in the District Court for the Middle District of Tennessee challenging a discriminatory law that denies transgender students, faculty and staff access to the bathroom, locker rooms and other sex-segregated facilities consistent with their gender identity. The case is brought on behalf of 14-year-old Alex* and his parents, Amy A. and Jeff S., as well as 6-year-old Ariel* and her parents, Julie and Ross B.

In Florida, we joined the law firm of Arnold & Porter in representing a 13-year-old transgender girl to file a lawsuit challenging the discriminatory Fairness in Women’s Sports Act. Daisy*, an 8th grader, has participated in team sports since she was 8 years old. She finds joy, friendship and acceptance in basketball, softball and currently, as a goalie on three different soccer teams. The Florida law will force Daisy to either play on the boys’ soccer team at school, which she will not do, or quit sports altogether,which would be detrimental to her academic and social development, while also potentially risking her personal privacy and safety.

For many years, the HRC Foundation has partnered with legal and civil rights groups to advocate for civil rights in the courts. Now, through its Impact Litigation Initiative, HRC Foundation has expanded its legal footprint to include strategic impact litigation in domestic and international courts. Working with the world’s top law firms, the HRC Foundation is pursuing strategic cases and using the courts to hold accountable entities and governments who target the LGBTQ community with discriminatory laws and policies.

* Children’s names have been changed to protect their anonymity.