Leading parent-advocates met with the Congressional Transgender Equality Task Force as part of a two-day summit featuring the release of a new guide for parents of gender expansive youth.

Today, HRC's  Parents for Transgender Equality National Council, a group of the nation’s leading parent-advocates in the fight for transgender equality, met with members of Congress to discuss their families’ moving journeys and the urgent need for Congress to pass the Equality Act. The Equality Act is a comprehensive LGBTQ civil rights bill which is a priority for the U.S. House’s new pro-equality leadership and is expected to be re-introduced soon

“For transgender young people, passing the Equality Act would be life-affirming and, in some cases, lifesaving,” said Jay Brown, Acting Senior Vice President, HRC Programs, Research & Training. “These parents’ children need and deserve clear protections from discrimination throughout daily life, from welcoming schools to inclusive health care. The unique stories and voices of these parents have already changed countless minds, and they will be critical in continuing to push equality forward alongside allies like Representative Kennedy and the Congressional Transgender Equality Task Force.”

“For two years, transgender children have fought daily battles against intolerance in their schools and their communities, while the adults tasked with protecting them at the highest levels of this Administration offer words of bigotry and hatred instead,” said U.S. Representative Joe Kennedy, III, chair of the Congressional Transgender Equality Task Force. “Listening to these parents today demonstrated once again that there is no force greater than a parent’s love and no force darker than a government that fails to see the humanity in her youngest citizens. We fight with those children and their parents because they should never doubt that they are heard and they are seen, and they should always know that they will never be erased.” 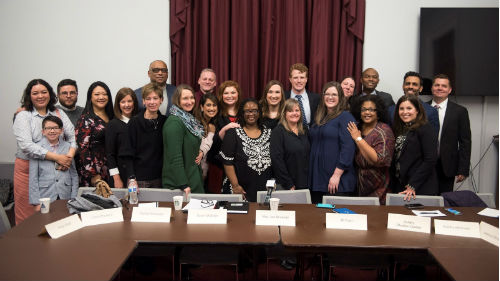 “Our families need the Equality Act to become law,” said Rachel Gonzales, a member of HRC's Parents for Transgender Equality. “As residents of Texas, our family has experienced first hand the threat of both a hostile state government and cruel federal administration. Our state or zip code should not dictate whether our daughter is protected from discrimination.”

The Congressional Transgender Equality Task Force and the pro-equality members of Congress who attended the convening are on the frontlines of fighting for transgender youth, service members, patients and workers. Members in attendance who served in the previous Congress were all co-sponsors of the Equality Act.

The Equality Act was first introduced in July 2015. A recent study from PRRI found that seven in 10 Americans (71 percent) support laws like the Equality Act, which protect the LGBTQ community against discrimination in employment, public accommodations and housing. More than 130 major employers, with operations in all 50 states, have also joined HRC’s Business Coalition for the Equality Act, urging Congress to pass these crucial protections.

The meeting on Capitol Hill followed a two-day summit with HRC’s Parents for Transgender Equality National Council at HRC’s Washington, D.C., headquarters. Parents brainstormed strategies for change, discussed priorities and heard from HRC staff and leaders, including those working to expand inclusion in schools, child welfare and adoption agencies and health care facilities.

In conjunction with the summit, the HRC Foundation released a new guide for parents of non-binary, gender fluid and gender-expansive youth. The guide includes a helpful primer on terminology, resources for building inclusive communities and answers to frequently-asked questions from parents of gender expansive, non-binary and gender fluid youth.

A recent survey from HRC underscored the critical need for the new guide. HRC and researchers from the University of Connecticut found that less than a quarter of transgender and gender expansive youth feel like they can definitely be themselves at home and more than seventy percent of transgender and gender expansive youth reported hearing their families make negative comments about LGBTQ identities.