The unveiling comes on Juneteenth, which commemorates the emancipation of the last remaining enslaved Black people in the United States.

Today — on Juneteenth, which commemorates the emancipation of the last remaining enslaved Black people in the United States — the Human Rights Campaign announces an art installation project with celebrated and world renowned conceptual artist Hank Willis Thomas. The installation, unveiled during this critical election year, is a massive work by Thomas called “All Li es Matter.” Installed down the block from the Black Lives Matter protests and the White House, the work wraps the headquarters building of HRC at 1640 Rhode Island Ave NW, Washington, DC.  Measuring 85 x 30 feet, it is the largest presentation ever of a work by Thomas. Thomas, a conceptual photographer, uses his work to address issues of identity, politics, popular culture, and mass media. 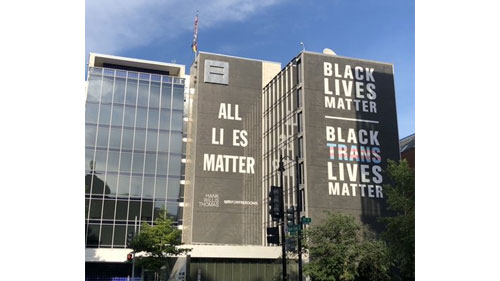 The provocative work by Thomas edits the dismissive phrase "All Lives Matter" that is used to undermine the Black Lives Matter movement. By removing one letter from the phrase, the artist creates an entirely different and counter poignancy, tackling centuries of lies and misrepresentations of Black people in America.

“The Human Rights Campaign is in full support of the righteous protesters who have taken to the streets to demand action and accountability for the horrific violence we have seen against Black and transgender people in this country,” said HRC President Alphonso David. “I am proud to join forces with Hank Willis Thomas and share his important conceptual piece and message just six blocks from the White House, where a man notorious for his lies and lack of empathy resides, and at the heart of the protests against racial violence. All lives cannot matter until Black lives, and Black trans lives, matter.”

The installation is a collaboration with Thomas and For Freedoms, a platform for creative civic engagement, discourse, and direct action founded by Thomas and Eric Gottesman. Thomas’s “All Li es Matter” piece was shown in 2018 as a billboard in St. Louis. In addition to the art installation, HRC has also attached a large scale banner, not created by Thomas, to the headquarters building that reads “Black Lives Matter | Black Trans Lives Matter.”

“It seems so obvious that many people are lying when they say ‘All lives matter,’” Thomas told New York Magazine in 2018. “If you believe all lives matter, then you’d also acknowledge that Black lives matter, and those same people would be marching alongside if they believed that.”

In the face of the recent rash of horrific violence against Black and trans people, under the leadership of HRC President Alphonso David, the first Black man to lead the organization in its 40 year history, HRC has committed to embracing racial justice as core to its mission of LGBTQ equality. This week, HRC designated Juneteenth as an organizational holiday and released a letter, alongside 350 LGBTQ organizations, calling for transformational change in policing. In recent weeks, HRC has authored an open letter, signed by more than 500 LGBTQ organizations at this point, condemning racial violence and has called for concrete policies that address police reform. It has released tips on protesting peacefully and safely, and affirmed the truth that Black lives matter, and Black trans lives matter. 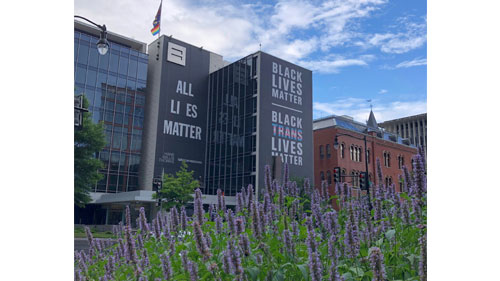 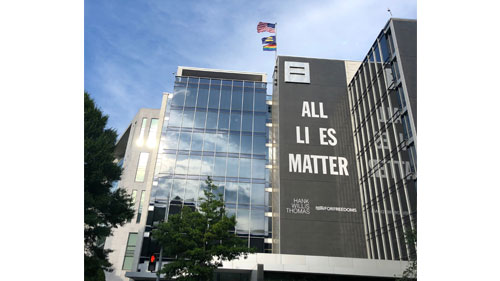