For Arianna Lint, services for the transgender community must be centered on the needs that trans people themselves identify as priorities.

For Arianna Lint, services for the transgender community must be centered on the needs that trans people themselves identify as priorities. Originally a lawyer in Peru, Lint came to work in trans advocacy through a role in Florida’s Health Department.

“Working in the administration in Florida, it could be so difficult to reach the transgender community from within the Health Department,” the South Florida-based advocate said. “But I know the reality, and I am an expert in my community. So, I think I have to change things differently.”

That’s why in 2015, she founded Arianna’s Center, which provides programs and services for the local trans community with the goal of “helping individuals thrive.”

“I think the uniqueness of my organization is that we are transgender women of color who are developing the programs,” said Lint. “We know what we need. Nothing is developed for us without us.”

Those programs include providing transgender competency trainings to government agencies and universities, teaching English to speakers of others languages, and helping trans people study for and receive their GEDs. The center also has a program to provide two weeks of emergency housing for transgender people who have been released from jail or a detention center, part of its work to empower the community.

In all aspects of her work, Lint considers how it will empower others to continue bringing more people along to meet the needs within her community.

“My organization, it was one of the first organizations for the transgender community, but right now in Florida, we have amazing trans-led organizations who are really working and working with the community,” Lint said. “That is what is important -- when you be the example for other ones to come along. This is a space for everyone.”

Last month, she joined advocates from across the U.S. in Washington, D.C., as one of the facilitators for the inaugural cohort of HRC Foundation’s “Elevate: A Fellowship Advancing Public Health Leadership for Transgender Women of Color.” The experience, Lint said, was transformative.

“I’m very proud of my work and I do my best, but when I was coming and seeing these amazing emerging leaders -- just when they talk -- it’s amazing to see,” she said. “In my time, when I started my advocacy, we didn’t have these resources. It’s just so amazing to see the power of how agencies can change. And the vision or perspective of others can change things just by being an example.” 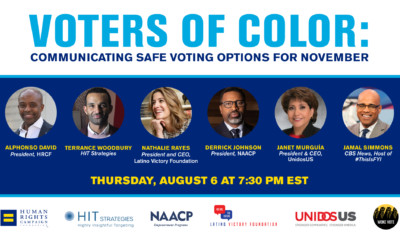