This Women’s History Month, HRC shines a light on women officials in swing states leading the charge for LGBTQ equality.

From trailblazing figures of our past, to champions on the front lines of today’s movement, women have been at the heart of the fight for equality. For Women’s History Month, HRC is shining a light on openly LGBTQ women leaders and allies who are leading on LGBTQ-inclusive bills in the battleground states of Arizona, Michigan, Nevada, Ohio and Wisconsin, as well as in our nation’s capital.

All across the country women are running for office, winning and advancing the rights for LGBTQ people.

In a huge 2018 midterm victory, Gretchen Whitmer defeated anti-LGBTQ Attorney General Bill Schuette, and as her first order of business, Whitmer signed an executive order to provide workplace protections for LGBTQ employees of the state. Building off this momentum, she has joined openly LGBTQ state legislators in support of amending the Elliott Larsen Civil Rights Act to guarantee protections in housing, workplace and public accommodations to all LGBTQ people living in the state. Gov. Whitmer also made history by flying the Pride flag for the first time in Michigan’s Governor’s office, signifying to all LGBTQ Michiganders that their leader sees them, accepts them and will fight for them.

Thank you, @GovWhitmer, for showing solidarity with the LGBTQ community this #PrideMonth. https://t.co/6cH3MITuA3

Many battleground states such as Michigan and Ohio have fallen into the lowest category for LGBTQ-inclusive laws and policies, and women legislators are joining pro-equality governors like Whitmer by introducing protection bills. 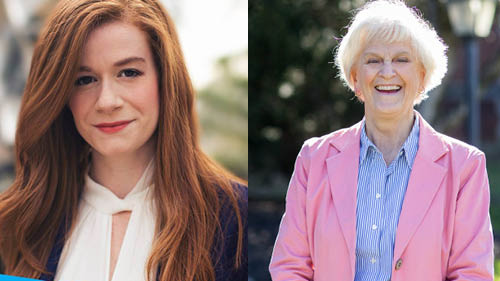 This year, Ohio’s State Rep. Mary Lightbody introduced a bill to protect LGBTQ youth from the dangerous and abusive practice of so-called “conversion therapy,” and State Sen. Mallory McMorrow introduced a similar bill in Michigan. Both of these bills would dramatically improve the lives of many Americans by helping end the patchwork of protections that currently leaves so many at the mercy of their ZIP code to define their rights.

Allyship toward LGBTQ equality extends from local government all the way up to the U.S. Congress.

Under Speaker Nancy Pelosi’s leadership, pro-equality women in the House helped make history and passed the Equality Act. Two of these congresswomen were Nevada Reps. Dina Titus and Susie Lee, who have been longtime advocates of LGBTQ rights. In addition to voting in favor of pro-equality bills, Rep. Titus is leading on them -- including introducing the Globe Act, which would restore the State Department’s role in defending LGBTQ people’s rights around the world.

Rep. Susie Lee has also been fighting alongside HRC for three years -- tirelessly empowering LGBTQ and Equality Voters to turn out and vote, to be represented in federal surveys that decided funding for programs and to hold elected leaders accountable for anti-LGBTQ views.

I’m proud to be an ally to @HRC & the LGBTQ community. Know that I’m w/ you every step of the way. That’s why I helped introduce the #EqualityAct, which will add gender ID & sexual orientation to the Civil Rights Act. All I can say is: it’s about damn time. Let’s keep fighting. pic.twitter.com/xlAlLnnEKD

Women’s representation is intersectional, and many leaders in the states are also openly LGBTQ.

More than ever, we are seeing openly LGBTQ women winning office and making history especially in swing states:

LGBTQ women of color are representing, leading and pushing our movement forward.

Of these openly LGBTQ officials, women of color like Nevada legislators, Pat Spearman and Dallas Harris have supported underserved communities by passing a sweeping set of pro-LGBTQ bills, like expanding protections for those living with HIV and AIDS. Meanwhile, Wisconsin State Rep. Jocasta Zamarripa has partnered with HRC for Bi Visibility Day and helped raise awareness of the health disparities facing bisexual people, especially bisexual people of color.

As we lift up these women and countless others moving our movement forward, we must join them by ensuring we are turning out to vote in primaries and this November.