As 20BiTeen comes to an end and another decade wraps up, we want to look back on some of the standout moments for bi+ representation over the last 10 years.

As 20BiTeen comes to an end and another decade wraps up, we want to look back on some of the standout moments for bi+ representation over the last 10 years. We use the term “bi+” as an umbrella term for identities that are not exclusively same-sex attracted or different-sex attracted, such as bisexual, pansexual, queer and sexually fluid.

From the big screen to the small screen, music and sports, we have seen a bigger spotlight on the stories and experiences of bi+ people, who make up the largest percentage of the LGBTQ community.

Here are 10 of our favorite moments for bi+ visibility, in no particular order.

The 2018 celebration, thought to be the country’s first ever city-sponsored, bisexual-themed pride, was hosted by the City of West Hollywood, HRC’s Los Angeles Steering Committee and amBi.

HRC Los Angeles is Proud to be a Co-Host for this historic event on Saturday! Catch up on the event here: https://t.co/85DQKvTMFZ

And be sure to join us this weekend! pic.twitter.com/0XAmv8cLfP

2. Janelle Monáe comes out, and the internet exploded with searches.

When Janelle Monáe came out as “a queer Black woman in America” in 2018, it was a moment of visibility that resonated with many -- evidenced by the number of Google searches for the definition of pansexual.

NFL free agent Ryan Russell made history this year by coming out as bisexual in a powerful essay on ESPN. “My truth is that I'm a talented football player, a damn good writer, a loving son, an overbearing brother, a caring friend, a loyal lover and a bisexual man,” Russell said.

4.  The Obama administration welcomes bi+ leaders from around the U.S. to the White House.

In 2015 and 2016, the administration held two powerful bisexual community briefings in conjunction with Bisexual Awareness Week to talk about issues facing the bi+ community and to celebrate bi+ identities. HRC staffers were among the featured speakers to share their stories of navigating the intersections of their identities as bi+ people.

For more than 20 years now, the bisexual pride flag has been a symbol of visibility and connection for bi+ people around the world. It was created by BiNet USA’s Michael Page to increase the visibility of bi+ people within the broader LGBTQ community.

For the past 20 years, the bisexual pride flag has been a symbol of bi pride and visibility.

Today, @HRC is proud to celebrate its anniversary with the bi community around the world. ������ pic.twitter.com/G97lRqwt6x

6. Sara Ramirez brings bi+ visibility to the screen and to the frontlines of activism.

From her powerful coming out story in 2016 to her groundbreaking roles in shows such as Grey’s Anatomy and Madam Secretary and her work with organizations such as True Colors United, Ramirez works to create spaces where bi+ people feel safe enough to celebrate one another openly and without fear.

Those of us who love more than one sex/gender use many different labels, but we share a common experience: our presence makes people uncomfortable. Our very existence as #bisexual threatens heteronormativity and the gender binary. —@SaraRamirez #HRCTwitterTakeover

While there are many comic characters in books that are bi+, one made her way into Marvel’s cinematic universe. Valkyrie, played by out actor Tessa Thompson, is the first bi+ superhero in the franchise’s movie. “As king, she needs to find her queen,” Thompson said this year.

"As king, she needs to find her queen."

8. “Getting Bi” gets stuck in our heads after watching Crazy Ex-Girlfriend.

The show Crazy Ex Girlfriend created storylines about a diverse group of people, including at least three bisexual characters. A major plot line in the show features Darryl, played by Pete Gardner, who came out as bisexual in a song and dance called “Gettin’ Bi” -- an anthem for bi people that dispels myths, debunks stereotypes and gave us epic “singing in the shower” material.

9. Pro-equality bi+ candidates are elected up and down the ballot.

From Oregon Gov. Kate Brown’s historic victory in 2016 and Arizona’s Sen. Kyrsten Sinema becoming the first out bi+ person elected to both the U.S. House of Representatives in 2012 and the U.S. Senate in 2018, to leaders like Wisconsin State Rep. JoCasta Zamarripa and Minneapolis’ Andrea Jenkins, bi+ people are moving equality forward at the federal, state and local levels.

10. MTV’s “Are You The One” becomes the first reality show to feature an all bi+ cast.

In 2019, the MTV show became the perfect match for many LGBTQ people with its bold choice to feature an all bi+ cast. “As a person of color, as a gender non-conforming person … all my life I’ve just wanted to see myself represented just [the] slightest bit -- to not only see myself represented but to be the representation that I wanted to see,” Basit Shittu, a Brooklyn-based artist and cast member of the show, who joined HRC at our annual #BiWeek event.

and other bi+ community members and advocates pic.twitter.com/bXZa02Xa6n

For more information about the bi+ community, visit hrc.org/Bisexual. 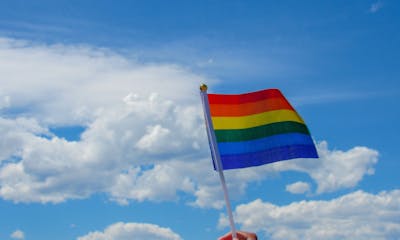