The HRC Foundation released the results of a survey of employees across the nation, revealing the persistent daily challenges that have led nearly half of LGBTQ people to remain closeted at their workplaces -- a rate largely unchanged over the past decade. A Workplace Divided: Understanding the Climate for LGBTQ Workers Nationwide, HRC’s third national workplace study over the past decade, shines a light on the often-intangible, nuanced issues in the workplace that keep LGBTQ workers “separate,” leaving many feeling distracted, exhausted or depressed, and believing they have nowhere to turn for help.

The survey of both LGBTQ and non-LGBTQ workers reveals that, despite significant progress in recent years -- including the Supreme Court of the United State’s decision embracing marriage equality in 2015, as well as corporate policies and practices that increasing embrace LGBTQ inclusion, substantial barriers to full inclusion. Many of these barriers exist within interpersonal workplace connections, including non-work conversations or outings among coworkers.

“While LGBTQ-inclusive corporate policies are becoming the norm, LGBTQ workers too often face a climate of bias in their workplace,” said Deena Fidas, director of HRC’s Workplace Equality Program. “LGBTQ employees are still avoiding making personal and professional connections at work because they fear coming out -- and that hurts not only that employee, but the company as a whole. Even the best-of-the-best private sector employers with top-rated policies and practices must do more to nurture a climate of inclusion for all.”

The HRC Foundation survey found that:

These survey results come at a time when the HRC Foundation’s Corporate Equality Index which measures LGBTQ-inclusive workplace policies and practices at Fortune 500 companies and top law firms, reported this year that a record-breaking 609 businesses earned a top score of 100 -- up from 517 last year. This set a new high water mark for corporate leadership over the 16-year history of the CEI. However, despite these explicit protections across the nation’s top companies, fifty-nine percent of non-LGBTQ workers surveyed by the HRC Foundation in a range of workplace sectors say they think it’s unprofessional to talk about sexual orientation and gender identity in the workplace, even though by their own self-reporting they regularly talk about these subjects through everyday conversations about spouses, families and life outside of work. The double standard LGBTQ workers are held to remains a persistent barrier to full inclusion on the job.

The results highlight the challenges facing LGBTQ workers, particularly transgender workers and people of color, who have experienced ongoing efforts by the Trump-Pence administration to undermine their rights. In October, Trump-Pence administration issued a discriminatory memo, arguing that anti-discrimination protections under Title VII do not apply to transgender people. The Department of Justice instructed all U.S. attorneys to adopt this dangerous position in all pending and future matters. The Department of Justice has also filed an amicus brief previewing this dangerous change of course by arguing that federal non-discrimination protections do not protect LGB people on the basis of sex.

The Human Rights Campaign’s top federal legislative priority is to win passage of the Equality Act, a bipartisan bill that would add comprehensive protections for LGBTQ people into our nation’s existing civil rights laws. More than 246 bipartisan cosponsors in Congress and 111 leading American companies have endorsed the bill and are continuing to build momentum for its passage in order to secure full federal equality for LGBTQ people.

The full report, A Workplace Divided: Understanding the Climate for LGBTQ Workers Nationwide, can be found here. 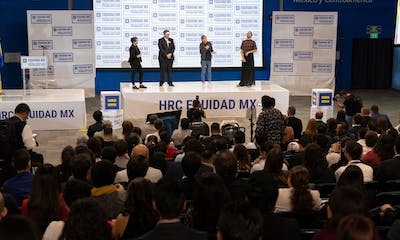