To mark Grandparents Day, Bobbie Celeste reflects on having a transgender grandchild.

At age two and a half, our grandchild announced, “I’m a boy!” Thus began our journey. The dress I brought from Hawaii for who I assumed was my granddaughter was worn once and never again. Living across the country, I hadn’t realized that this grandchild never liked dresses and instead picked basketball shorts and shirts with dinosaurs from his brother’s side of the dresser.

We were on a hike when a horseback rider came by and asked my grandchild if he liked horses. Our 3-year-old grandchild looked up at his Dad with a wide grin—he had been seen as a boy! Many conversations followed about what pronouns to use, whether people should be corrected--and if so, in what way?

Grandpa and I had complicated feelings. What was the best way to handle this development? How could a 3-year-old know who they were, gender-wise? Luckily, my daughter sat me down and convinced me to read and I began to understand what it means for a young child to express their gendered self.

As grandparents, we can have a tremendous impact, but this new reality may take some getting used to. We felt grief about the granddaughter that wasn’t to be, fear about what this precious child might face in the future, and worried about the extra parenting skills that our daughter and her husband might never have considered.

As with most grandparents, the bottom line is that we love our grandchildren profoundly and unequivocally.  Dr. Kristin Scherrer, one of the few researchers who has looked at the relationship between grandparents and LGBTQ grandchildren, found that even grandparents who do not feel positively about LGBTQ identities were nonetheless “fiercely supportive of their grandchild.”  In a number of cases, she found that grandparents were more supportive than parents, and that they often facilitate communication with other family members. In her book, Gender Born, Gender Made,  Diane Ehrensaft describes how grandparents are often able to rise above their own hesitancies about gender-expansive grandchildren:

“(It’s) their wisdom of age and their advantage of not being the child’s parents that allows them to have an outside view of the situation.”

Ehrensaft reports that she receives a “flow of emails and calls… from grandparents who want my advice on how best to help their grandchildren be healthy and happy as gender-non-conformers.”

Resources for grandparents are sprouting up. This summer, we attended the Gender Spectrum Conference which included a terrific Grandparents Group led by Diane Ehrensaft!  HRC has useful brochures and information for  family members including grandparents.

After several years, our grandchild has a new name and, complete with clothes, haircut, and pronouns, has transitioned to living his life as a cheerful 5-year-old boy. Along this journey, we have learned to follow our grandchild’s lead as he discovers who he is and how he wants to express himself. We have also learned to listen carefully to what his parents and brother need to keep the whole family healthy and happy. It is a wonderful ride to be on!

Bobbie L. Celeste is a counseling psychologist in Columbus, Ohio where she combines her love of psychology with her commitment to advocacy for social justice. She and her husband have two daughters and three grandsons.

To learn more about HRC’s work with transgender youth and their families, visit our website here. 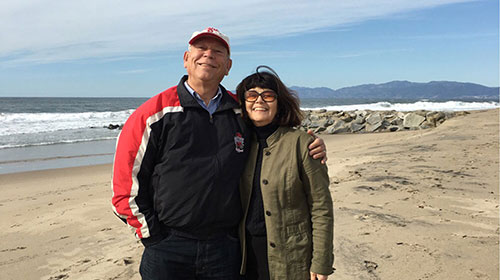