HRC Global Innovator Rosanna Flamer-Caldera, who participated in the inaugural Global Innovative Advocacy Summit in 2016, recently organized Abhimani, an international LGBTQ film festival in Sri Lanka for Colombo PRIDE 2017. Rosanna began her activism by founding the first LBT organization in Sri Lanka in 1999, and then went on to found EQUAL GROUND in 2004.

HRC caught up with Rosanna following the film festival to discuss Abhimani, Sri Lankan pride and her work to bring equality to her country.

What is Abhimani and how did it start?

The film festival is held each year in conjunction with the country’s annual Colombo PRIDE celebrations. Abhimani, formerly known as “Celluloid Rainbows,” started in 2005 and has always aimed to present a collection of queer films from diverse countries.

How is your organization EQUAL GROUND connected to the film festival?

EQUAL GROUND, Sri Lanka has organized Abhimani for the past 13 years. EQUAL GROUND works to mainstream LGBTQ issues in the country by getting support from the LGBTQ community and allies to create a stable, equal and harmonious society in Sri Lanka. I think the organization has greatly helped in bringing out a community that was largely hidden for so many years.

Colombo PRIDE is one of the oldest pride festivals in South Asia, first launching in 2005 with just a small party. Pride celebrations are more important than ever to the Sri Lankan LGBTQ community with the recent rise of extremist groups and homophobic government officials threatening the community. While we hope to one day march in the streets to demand our rights, we cannot march peacefully now. Although pride celebrations are generally private events, they are an opportunity to share information about the LGBTQ community with Sri Lankans.

What will you most remember from this year’s film festival?

The launch of this year’s festival was standing room only! And for the first time, we were able to advertise Abhimani in a local daily newspaper. It is really heartening for us as we gain more popularity within the LGBTQ community and acceptance from mainstream society. I believe that was because of the quality of films we received from all over the world.

HRC Global is proud to amplify the work of creative, courageous and effective leaders like Rosanna who are committed to advocating for the rights of LGBTQ people in Sri Lanka. HRC Global advocates for LGBTQ equality around the world through fellowships, partnerships and thought leadership. Read more about our work here and our Global Summit program here. 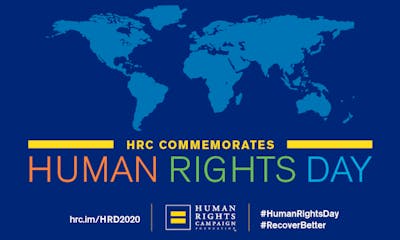