The tragic loss of of gay Alabama teen Nigel Shelby, who experienced anti-LGBTQ bullying at school, has shaken LGBTQ and allied communities across the country.

The tragic loss of of gay Alabama teen Nigel Shelby, who experienced anti-LGBTQ bullying at school, has shaken LGBTQ and allied communities across the country. Nigel, 15, is remembered by his mother, Camika Shelby, as “outgoing” and “always full of joy, full of light, he was always singing, always dancing.”

In an interview with WAFF 48 News, Shelby said that Nigel had experienced depression and struggled with his identity and bullying at school.

“I don’t want him to be remembered as a kid who was bullied for being gay and who took his own life,” Shelby said. “He was so much more than that. He was sunshine. He was just a great spirit to have around and it just breaks my heart because I feel like he had so much more love to give."

Suicide is the second leading cause of death among U.S. teenagers, and members of the LGBTQ community are at great risk due to the impact of social stigma, family rejection, bullying,  stigma, harassment and abuse. Studies show these rates are increased for Black children.

HRC and the University of Connecticut’s 2019 Black and African American LGBTQ Youth Report found alarming trends among more than 1,600 respondents, ranging in age from 13 to 17:

Nigel’s story reinforces the need to support and affirm LGBTQ youth -- particularly Black LGBTQ youth and other youth of color. Addressing these startling statistics starts with schools and communities alike working to foster safe and inclusive spaces for LGBTQ young people that also acknowledge the impact of historical and contemporary realities of white supremacy.

The combination of discriminatory policies, systems, portrayals and biases complicate the ability of Black and African American LGBTQ youth to fully express and explore their intersecting racial and LGBTQ identities at a time that is already confusing and difficult to navigate for so many young people.

In building a world where Black and African American youth can thrive, we all must dismantle the barriers that deprive them of equal opportunities, dignity and respect. Both white and non-Black people of color allies must actively work to eliminate the forms in which anti-Blackness appears in our daily lives, communities and society as a whole.

To learn more about supporting LGBTQ youth in their homes, schools and communities, visit www.hrc.org/youth. For more information about how HRC Foundation’s Welcoming Schools Program can help schools work to become more inclusive and welcoming of LGBTQ young people, check out welcomingschools.org. 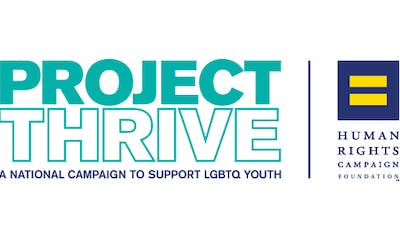