“The LGBTQ community is under attack across the globe, and that’s why it’s incumbent upon all of us to keep pushing forward and strengthen our global movement,” said Chad Griffin, President of HRC, in an article written for the World Economic Forum’s Global Agenda.

Panelists highlighted the progress we have made, but then urged that we are not yet finished. Though the troubling elections in Western Europe and the U.S. have left the LGBTQ community feeling fearful and uncertain, the panelists emphasized the critical roles that corporations can play in the absence of government support.

This was also the first year that the official program of the World Economic Forum’s annual meeting included two sessions focused exclusively on LGBTQ issues. The first LGBTQ session, entitled “Discover a World beyond X and Y Genes,” explored how research in neuroscience, genetics and biology has changed how we think about gender identity. The second session, entitled “Good for Business: The Power of Being Out,” was grounded in the notion that companies perform better in LGBTQ-inclusive societies and offered ways in which corporations can support out employees.

While in Davos, Ty Cobb, Director of HRC Global, joined Shamina Singh, President of Mastercard Center for Inclusive Growth, and Antonio Zapulla, COO of Thomson Reuters Foundation, for a web chat on the United Nations Sustainable Development Goals and LGBTQ diversity and inclusion.

LGBTQ human rights and equality have become a growing topic of conversation at the World Economic Forum's annual meeting since HRC co-hosted a historic breakfast in 2014 alongside Credit Suisse, The Huffington Post, Microsoft, the Paul E. Singer Foundation, the Third Point Foundation and TimeWarner. Last year, HRC hosted a roundtable of corporate executives with U.S. Vice President Joe Biden to celebrate progress and call on businesses to continue the fight for LGBTQ equality all around the world.

HRC continues to partner with businesses to improve workplace equality, and actively works to have a societal global impact. To learn how to join industry leaders in HRC’s growing global business coalition, email workplace@hrc.org. 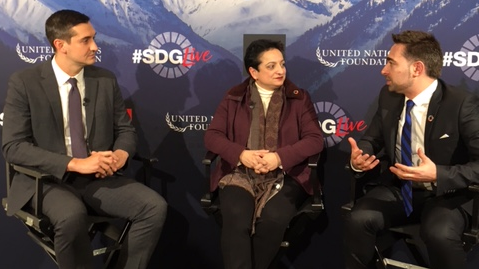