Today, HRC strongly condemned the Trump-Pence administration’s decision to carry out a sweeping “license to discriminate” that puts millions of LGBTQ Americans at risk of discrimination, as well as release a new regulation that could deny millions of Americans access to critical contraceptive care previously guaranteed under the Affordable Care Act (ACA).

“Today the Trump-Pence administration launched an all-out assault on LGBTQ people, women, and other minority communities by unleashing a sweeping license to discriminate,” said HRC President Chad Griffin. “This blatant attempt to further Donald Trump's cynical and hateful agenda will enable systematic, government-wide discrimination that will have a devastating impact on LGBTQ people and their families. Donald Trump and Mike Pence have proven they will stop at nothing to target the LGBTQ community and drag our nation backwards. We will fight them every step of the way.”

“It’s unconscionable that the Trump-Pence administration also today encouraged employers to exert control over the essential health care decisions of their employees,” continued Griffin. “The rule change on contraception will undoubtedly limit access to vitally important care that women and so many in the LGBTQ community rely on every day. We each deserve to have the freedom to live and plan our lives with dignity, and this administration’s reckless efforts to undermine the health care of millions of Americans must be stopped.”

In May, Donald Trump signed an order that threatened to exacerbate anti-LGBTQ discrimination by laying the groundwork for Attorney General Jeff Sessions to implement the license to discriminate announced today. Already, more than 50 percent of Americans live in an area of the U.S. where LGBTQ people are at risk being fired, evicted, or denied services because of who they are — and two-thirds of LGBTQ people report having faced such discrimination in their lives.

A preliminary analysis of the Trump-Pence administration’s license to discriminate indicates that LGBTQ people and women will be at risk in some of the following ways:

The guidance instructs federal government attorneys on how to handle matters before them and instructs federal agencies to reconsider current and future regulations in light of this license to discriminate. It’s important to note this Department of Justice interpretation of existing federal law is not consistent in the way that federal courts have interpreted these issues and are subject to legal challenges. 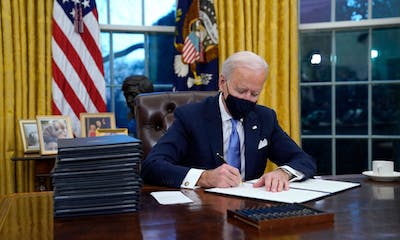