Guild is the 18th school in the nation to earn the Welcoming Schools Seal of Excellence and the third in Boston Public Schools, following John F. Kennedy School and Gardner Pilot School.

On Wednesday morning, the students at Curtis Guild Elementary School in Boston, wearing the colors of the rainbow, greeted their guests -- including Boston Mayor Marty Walsh and other elected officials -- with these simple, yet incredibly powerful words. The school community gathered to receive Human Rights Campaign Foundation’s Welcoming Schools Seal of Excellence, the program’s highest honor.

The Seal of Excellence is awarded to schools that demonstrate outstanding dedication to creating and sustaining welcoming and inclusive school environments by meeting stated benchmarks and doing innovative work to further equity and diversity. Over the past three years, these students, along with the school’s administration, teachers and support staff, have been hard at work cultivating an environment in which everyone at Curtis Guild Elementary School is safe, included and welcome. Among Guild’s notable achievements are the creation of a Welcoming Schools library and the development of “community-facing policies” that promote an inclusive school culture and detail the rights of LGBTQ students.

Many local officials and leaders attended the event to honor Guild’s tremendous accomplishment, including Boston Mayor Marty Walsh, State Rep. Adrian Madaro, City Councilor Lydia Edwards and both the interim and incoming Superintendent of Boston Public Schools. For the first time, a significant contingent from the local HRC Steering Committee was also present to show their support. Ellen Kahn, HRC Foundation’s director of children, youth & families, presented the Seal of Excellence banner to Principal Karen McCarthy to be proudly displayed in the school. 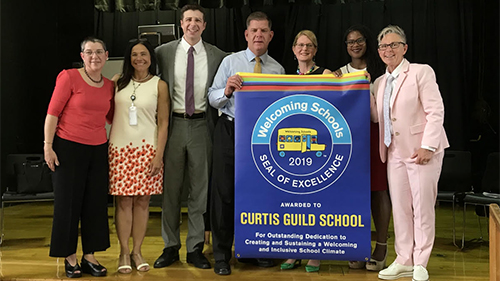 Guild is the 18th school in the nation to earn the Welcoming Schools Seal of Excellence and the third in Boston Public Schools, following John F. Kennedy School and Gardner Pilot School. Three other Boston schools have begun the process toward earning this distinction. Welcoming Schools is so proud of the work Guild has done. It is a recognition well-deserved, but the true reward is the smiling faces of children for whom school is a place where they are seen, respected, valued and empowered to be themselves.