HRC was in Houston for the unveiling of a new LGBTQ Pride wall to promote visibility for the LGBTQ community.

On April 12, HRC was in Houston for the unveiling of a new LGBTQ Pride wall to promote visibility for the LGBTQ community. The #BeVisibleHTX wall is a collaboration between Eric Edward Schell, creator and photographer for Pride Portraits, his partner and local transgender rights activist Crimson Jordan, Houston artist-designer Hugo Perez and Jenni Tranweaver, owner of Jenni’s Noodle House.

Jim Obergefell, named plaintiff of the landmark Obergefell v. Hodges case, cut the ribbon at the dedication ceremony. The wall displays a quote from Obergefell written for the 2017 Equality March for Unity and Pride: “I march because of the people who marched before me. Thanks to them, I live in a better world due to their bravery, and I owe it to them and those who come after me to continue the fight for equality.”

Ellen Cohen, Houston’s mayor pro tem, welcomed the crowd and expressed her support for Houston’s LGBTQ community. Cohen lamented the unfortunate outcome of the 2015 vote that failed to protect the Houston Equal Rights Ordinance because as residents know, Houston truly is a diverse and welcoming place. Cohen concluded her remarks with the wish “that one day everyone will want to stand in front of this great wall and have their picture taken.”

HRC Associate Regional Field Director Ryan Wilson was on hand for the festivities. Wilson, a Houston resident, reflected, “I’m lucky to have the privilege to live out and visible every day, but growing up queer in a religious household, I struggled to find connections to the LGBTQ community. I hope this rainbow on a wall will be another way that LGBTQ people will know that they are loved, welcomed and supported here in Houston.”

Tranweaver and her husband Scott will be honored at the 21st annual HRC Houston Gala on April 7 with the HRC Ally for Equality Award. HRC will also honor Karamo Brown, one of the ‘Fab 5’ in Netflix’s popular television series “Queer Eye.” Jussie Smollett (“Empire,” “Sum of My Music”) will present the HRC Visibility Award to Brown at the annual event.

Currently, HRC has several field organizers in Texas to advance LGBTQ equality in the Lone Star State. HRC continues to work alongside Equality Texas, ACLU of Texas, Texas Freedom Network, the Transgender Education Network of Texas and others on the ground to battle against dangerous or harmful bills that attack the dignity of LGBTQ Texans.

To learn more about HRC’s work in Houston and throughout the South, contact Ryan Wilson, HRC Associate Regional Field Director, at ryan.wilson@hrc.org or visit hrc.org/Texas. 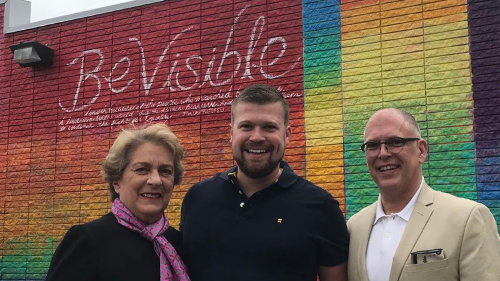 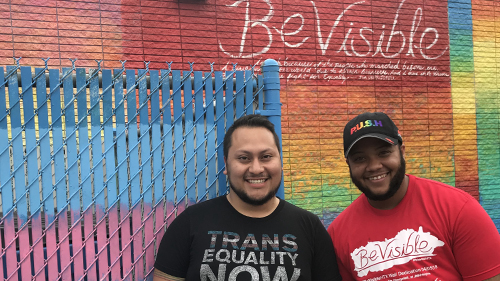 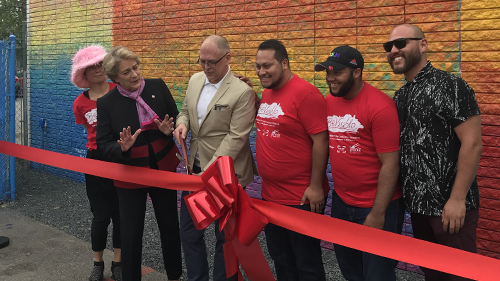 Jim Obergefell cuts the ribbon at the unveiling of the #BeVisibleHTX pride wall.