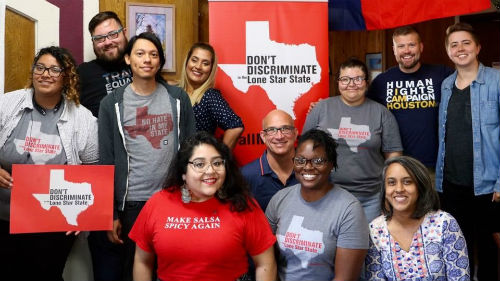 HRC has seven field organizers and four offices across Texas who work to mobilize opposition to any anti-LGBTQ legislation.

HRC continues to work alongside Equality Texas, ACLU of Texas, Texas Freedom Network, the Transgender Education Network of Texas and others on the ground to battle against dangerous or harmful bills that attack the dignity of LGBTQ Texans. As a coalition, we will stand together; we will support and comfort one another; and we will continue to work together until we defeat every bill this session that discriminates against LGBTQ Texans.

There's a great deal at stake for LGBTQ Americans in state legislatures across the nation. Learn more here and sign the pledge to take a stand against hate in your state.

Human Rights Campaign fights for LGBTQ equality in Texas alongside state and local groups and lawmakers. For more than 30 years, HRC has played a pivotal role in advancing LGBTQ equality in the Lone Star State. Learn more about HRC's work by clicking here.

If you are a reporter seeking up to the minute information about measures in Texas, please email press@hrc.org and/or subscribe to our daily tipsheet.

Paid for by Human Rights Campaign PAC (www.hrc.org) and not authorized by any candidate or candidate’s committee.

Hate Crimes
State has a law that addresses hate or bias crimes based on sexual orientation only.