“The stigma has damaged him and his feelings on his outlook,” said Fernandez de Castro, who now lives in Orlando, Florida. “I hope and believe that by talking openly in a modern & moral fashion about HIV to younger generations, we can have a better present & future. We can prevent new diagnoses and help those living with HIV to feel more positive about their outlook. I think that stigma begins with the fear of the unknown due to not having the proper information.”

Fernandez de Castro is one of the fellows in the Human Right Campaign Foundation’s GENERATE program, a fellowship program which mobilizes Black and Latinx LGBTQ+ youth to come together and advance efforts to end HIV and promote sexual health through advocacy, education and storytelling. Fernandez de Castro said he joined the program to better understand the stigma which often follows positive HIV diagnoses.

“I joined HRC's GENERATE program to get more knowledge about the history of HIV, and to better understand the substantial stigma around it. I feel this will help me be better prepared to communicate on the topic,” Fernandez de Castro said.

Fernandez de Castro volunteers at the LGBT+ Center for Health & Human Services in Orlando, where he helps test community members for HIV. At the center, Fernandez de Castro encounters many young LGBTQ+ folks who, through the power of education and adequate information, can potentially drastically diminish the cases of HIV and, in the near future, eventually eradicate the virus.

Young people, particularly LGBTQ+ youth, have long been at the forefront of HIV advocacy. Since the 1980s when HIV & AIDS became a national health threat, many young LGBTQ+ activists have taken the helm in bringing HIV & AIDS awareness and education to the masses while demanding government involvement. From the ACT UP movement to our own Undetectable=Untransmittable, or U=U campaign, it has significantly been young voices who hold the power to change the public’s understanding and response to HIV. However, while there have been significant medical and scientific advances to treat and prevent HIV since then, HIV & AIDS continues to disproportionately impact LGBTQ+ youth.

Our own research indicates that 24% of college students have never been tested for HIV, while 39% of high school LGBTQ+ youth used a condom during their last sexual encounter, compared to to 60% of non-LGBTQ+ youth. Perhaps the most stark finding is that among people ages 13 to 24 who are currently living with HIV, 44% don’t know their status. This can be attributed to stigma and discrimination which, when allowed to permeate, builds barriers that keep communities from obtaining factual and adequate HIV & AIDS education. Furthermore, it prevents people from getting tested and knowing their treatment or prevention options.

With groundbreaking antiretroviral medication to treat HIV and others to prevent the disease altogether, many educational campaigns and efforts — including those of HRC Foundation’s — have turned to younger audiences to help spread the word and help other young people learn more about HIV & AIDS. For those living with the virus, having to deal with associated stigma and misinformation can be as daunting as treating HIV. This can be especially true for young people who fear discrimination in the workplace, in the dating scene and among their friends and peers.

“Our organization has realized that in order to do more robust work in our education efforts around HIV & AIDS, we had to shift to a more community-centric approach, one that focuses significantly on LGBTQ+ youth,” said Vanessa Castro, associate director of HIV & Health Equality Programs. “HRC has long structured our efforts to incorporate young LGBTQ+ voices as a key partner to building a generation free of HIV stigma. This generation holds true power in eradicating HIV & AIDS by empowering themselves and each other, encouraging their friends and peers to put stigma aside and get tested, which is essential to start treatment or preventive medication.”

HRC Foundation’s My Body, My Health initiative, which inspired the GENERATE fellowship program, has also empowered and galvanized Black and Latinx LGBTQ+ youth to empower themselves and has been addressing the disproportionate impact of HIV on Black and Latinx LGBTQ+ youth through a partnership with Gilead Sciences, one of America’s leading pharmaceutical companies. Both the My Body, My Health initiative and GENERATE fellowship aim to place key messaging and services within the LGBTQ+ youth community.

The GENERATE fellows work closely with Castro to promote HIV education and awareness on their college campuses or community centers while engaging with their local LGBTQ+ youth communities. Newer social media platforms such as TikTok and Instagram have helped both find young LGBTQ+ activists and connect directly with them.

“The efforts of the GENERATE cohort emphasizes the collective power of direct community engagement,” said Castro. “As an organization, we are meeting with LGBTQ+ youth community right where they are and helping them bring transformative change to their communities. The fellowship program is one way that we are empowering young queer people, especially BIPOC folks, by providing them with the tools and resources to dismantle barriers, educate their peers, and cultivate a foundation for meaningful and inclusive conversations around sexual health, particuarly related to HIV.”

In this digital era, organizations and community leaders like the HRC Foundation have heavily invested in social presence to create direct communications with young activists doing groundwork. Social media and digital channels have allowed us to communicate essential messages directly to the audiences who need them the most.

While meaningful conversations are facilitated by social media and digital channels, language barriers can sometimes hinder the reach of certain audiences. That is why the My Body, My Health initiative released an entire microsite in Spanish to include useful information on HIV testing and prevention for Spanish speakers. The initiative has also undertaken a robust social and digital campaign to increase engagement with young LGBTQ+ Latinxs. Partnerships with community-based organizations such as Arianna’s Center in Florida have also helped HRC to provide direct services to community members.

Other LGBTQ+ youth-centric efforts include a health center directory from our HBCU program created to help Black LGBTQ+ youth at HBCUs know exactly what services their campus’ health center offers and a campaign to distribute free at-home HIV testing kit. The testing kits help LGBTQ+ learn about their HIV status without having to visit a clinic or talk to their own doctor due to concerns created by stigma and discrimination. This can be especially true for young transgender and gender non-conforming individuals.

The HRC Foundation has also designed campaigns as well as digital and social messaging related to the use of pre-exposure prophylaxis, otherwise known as PrEP. Most recently, the HRC Foundation broadcasted an informational webinar series hosted by the Center For Health Law and Policy Innovation of Harvard Law School to help folks understand the federal update on insurance coverage requirements for the drug.

As the HRC Foundation continues to work directly with LGBTQ+ youth in our efforts to ending the HIV epidemic, it is enabling them to hold the power in the ultimate fight against HIV stigma. HIV is no longer a death sentence, but is a manageable condition. People can thrive as long as they remain on antiretroviral therapy or can prevent transmission through PrEP. But the true power in combating HIV-realted stigma and discrimination lies in today’s youth, particularly LGBTQ+ youth. By encouraging themselves and other young people to discuss HIV prevention and treatment, they chip away at surmountable stigma and discrimination.

“I like to think that we are and will continue to be a progressive society, where acceptance and respect for each individual will prevail,” said Fernandez de Castro. “I think that the stigma will disappear over the years as medicine continues to develop. Only a better future awaits us thanks to the work of activists, educators and projects like GENERATE.” 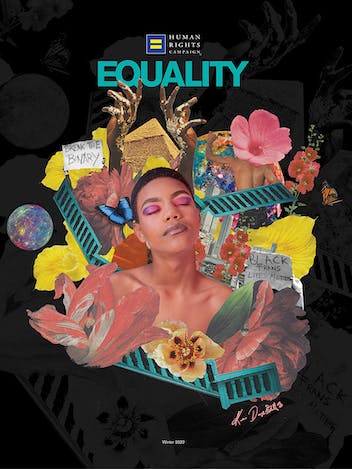