For over 40 years, HRC’s Campaigns and Organizing team has been dedicated to empowering and mobilizing the LGBTQ+ community and allies across the country who envision a more just and equitable world. From rallying in front of town halls and the Supreme Court, to powering phone banks and turning out the votes at the polls, to working directly with pro-equality candidates, the Campaigns and Organizing team has long fought for LGBTQ+ equality exactly where it starts: on the ground.

As part of our Campaigns and Organizing team, Deputy National Campaign Director Justin Unga and Associate Regional Campaign Director Narissa Rahaman have tirelessly worked to move equality forward. Both have built strong campaigns and organizing efforts to ensure that LGBTQ+ people are represented and heard at the local, state and national levels. That requires considerable time connecting with community members and organizations to build political activism within these communities. Much of that takes place at rallies, voter registration events, phone banks and other community engagements.

While both Unga and Rahaman take great pride in building the campaigns, they are equally prideful in working hand-in-hand with members of the community on a personal level.

“Through our nationwide HRC steering committees, we build community partnerships, such as Planned Parenthood or Equality Virginia, for instance. That’s really where the power of the work lies.”

The Campaigns and Organizing team coordinates HRC's electoral and legislative efforts in states like Tennessee, Florida and West Virginia, where several anti-trans bills passed in 2021. Rooted in local communities across the country, the team works with 33 HRC steering committees to recruit and train volunteers to mobilize Equality Voters in support of our efforts.

Much of the work is in tracking discriminatory legislation and, during election season, identifying pro-equality candidates to endorse. However, it’s important for individuals and communities to understand the power they hold, which the Campaigns and Organizing team prioritizes. Through information and education, Unga and Rahaman help constituents understand the scope of implications different policies and legislation can have on not only LGBTQ+ people, but everyone.

“Our work is not only to directly change laws, but to empower our communities by encouraging them to interact with all forms of government. We encourage activists to engage with their local elected officials and help create political power from the ground up.”

It is through this work that HRC helped to victoriously secure marriage equality in states across the country ahead of the SCOTUS marriage equality decision. We helped elect the most pro-equality presidential administration in 2020 along with a record number of pro-equality officials like Ritchie Torres and Sarah McBride. The team helped flip the U.S. Senate seat in Georgia and, most recently, keep Virginia on its path of progress by helping to campaign for 21 HRC-endorsed candidates in the state’s primary elections. Rahaman was on the ground in support of Danica Roem’s reelection campaign in Virginia, her fifth election cycle in the state.

Much like the LGBTQ+ community and our organization itself, the Campaigns and Organizing team recognizes that in order to establish full equality for LGBTQ+ people, we must recognize that intersectionality plays an important role.

“The work at HRC and of our team is becoming more intersectional, and it needs to do so in order for us to move forward in our movement,” Unga said. “The next stage of our movement is inclusivity where we recognize, understand and fight for all the intersecting identities and needs of people not only in the LGBTQ+ community, but of everyone.” 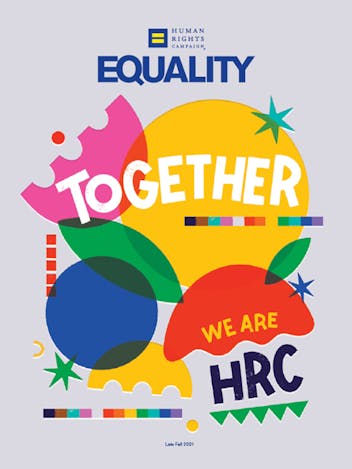