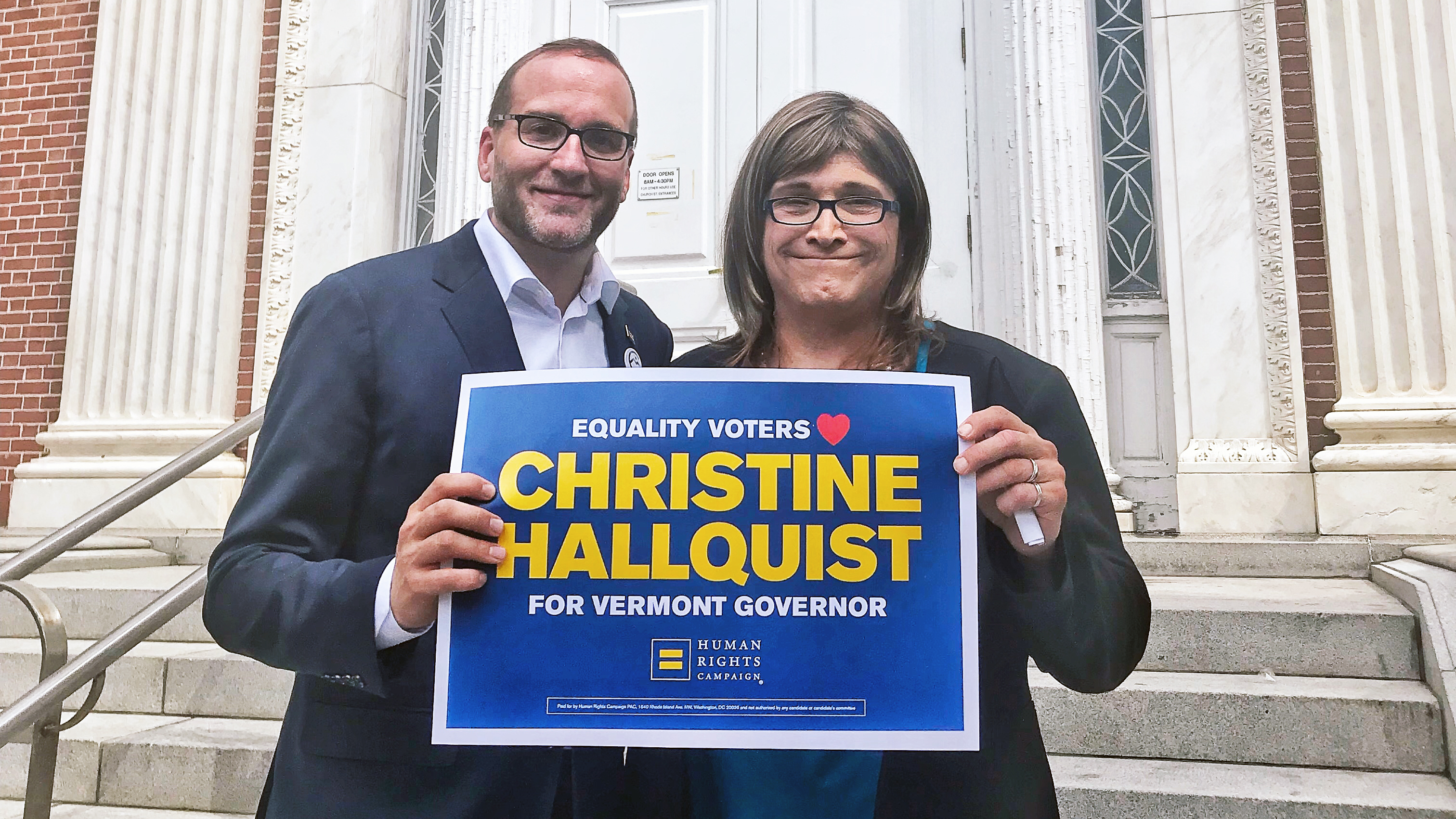 HRC announced its endorsement of Christine Hallquist (D) in her bid to become the next governor of Vermont. Griffin joined Hallquist, Vermont Lieutenant Governor David Zuckerman, House Majority Leader Jill Krowinski, Vermont Democratic Party Chair Terje Anderson, Burlington Mayor Miro Weinberger and others for a press conference today at Burlington City Hall to announce the endorsement and talk about the importance of the race. If elected this November, Hallquist will make history as the nation’s first out transgender governor.

“Christine Hallquist is poised to make history as the next governor of Vermont,” said HRC President Chad Griffin. “From civil rights to healthcare to government accountability, on issue after issue, Hallquist is committed to making Vermont an even stronger, more vibrant and inclusive state. HRC is proud to endorse Hallquist's historic bid for governor, and we are working to turn out tens of thousands of fair-minded voters to the polls for her this November. We look forward to working closely with Christine Hallquist as the next governor of the Green Mountain State.”

“When I first transitioned to my authentic self, I would not have believed that I would become Vermont's Democratic nominee for governor. Many people before me have fought to make my historic story possible,” said Christine Hallquist. “While I am honored to blaze the trail, I hope that one day it will be no question that LGBTQ members of our communities belong in political office. I am incredibly humbled and honored that the Human Rights Campaign, and HRC President Chad Griffin, have joined me to celebrate this occasion, and I am excited to continue working with the Human Rights Campaign as Governor of Vermont.”

Christine Hallquist is the first out transgender person to win a major party primary for governor. A former utility executive and businesswoman, Hallquist is a strong advocate for LGBTQ equality who is committed to strengthening local communities and finding solutions to the very real challenges that impact the day to day lives of all Vermonters.

In Vermont, HRC has identified more than 140,000 voters as likely “Equality Voters,” meaning they are strong supporters of progressive LGBTQ policies including marriage equality, equitable family law, and laws that prohibit discrimination on the basis of sexual orientation or gender identity. Last year, HRC announced a coast-to-coast campaign to mobilize voters for the midterm elections called HRC Rising, which represents the largest grassroots expansion in the organization’s 38-year history.