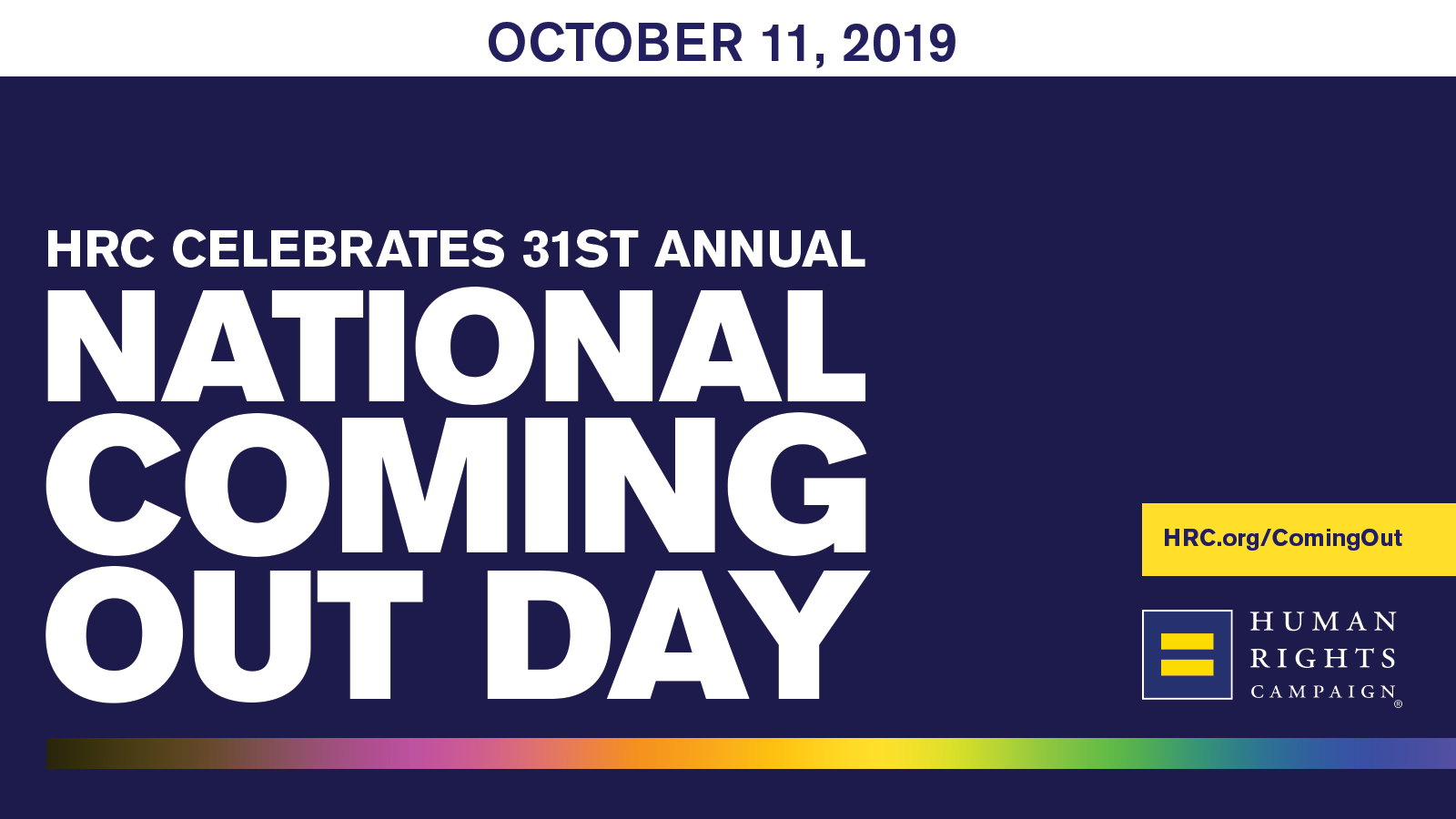 HRC is celebrating the 31st annual National Coming Out Day (NCOD). Every year on October 11, NCOD emphasizes the importance of coming out and creating a safe world in which LGBTQ people can live openly as their authentic selves.

“National Coming Out Day is an important opportunity to celebrate the power of visibility to change hearts and minds and how coming out can transform our lives and our movement,” said HRC President Alphonso David. “The tragic reality is that there are still far too many LGBTQ people across America and around the globe who are forced to live in fear. At a time when transgender people, especially transgender women of color, face an epidemic of violence, it is imperative we address this crisis at all levels of government and in every community. If you come out but cannot be safe, you are not free. The only way to triumph over fear is with love -- love of ourselves, our LGBTQ community and the diversity of communities and experiences that enrich our humanity. We must turn that love into action -- by living our truths and fighting for a world where every person is safe to live theirs.”

In honor of NCOD, HRC launched a powerful video and digital campaign highlighting inspirational stories of celebrities and influencers who have come out over the past year, including Jonathan Van Ness, Lil Nas X, Ryan Russell, Willow Smith, and Lilly Singh.

In recent years, the LGBTQ community has made great strides toward full equality in the U.S. through legal victories and political change built on decades of grassroots activism. This May, for the first time, a chamber of Congress passed a comprehensive LGBTQ civil rights bill -- the Equality Act.

Yet at the same time, the LGBTQ community faces unprecedented attacks from the Trump-Pence administration, including the rescinding of key protections for transgender students, the banning of transgender troops from serving openly and the advancement of policies that would open the door to discrimination against LGBTQ people in health care, housing, public accommodations and other aspects of life. In addition, 50% of LGBTQ Americans live in the 29 states that still lack statewide legal non-discrimination protections, leaving their residents and visitors at risk of being fired, denied housing or refused service. And in 2019, at least 19 transgender people have been killed in the United States, nearly all of them Black transgender women.

Research shows that when an individual knows someone who is LGBTQ, they are far more likely to support LGBTQ equality. For example, a 2016 survey commissioned by the HRC Foundation -- the educational arm of HRC -- found that 35% of likely voters know or work with a transgender person, twice as many as a report from 2014 found. Significantly, more than two-thirds of those who said they know a transgender person expressed support for full LGBTQ equality.

Last year, HRC worked with Twitter to mark the occasion for the first time in history with a dedicated National Coming Out Day emoji in conjunction with the hashtag #ComingOutDay. Social media users can use the hashtag again this year to elevate their voices, connect with the community and share their stories.

The HRC Foundation has launched several resources available to encourage and support individuals in their coming out journey, including guides on coming out as your true identity, in communities of faith, among different racial and ethnic identities, in the workplace, at the doctor and in a variety of other contexts. Visit hrc.org/comingout for more information.

Today is National #ComingOutDay and we want to celebrate every brave soul that has decided to come out and live their truth. pic.twitter.com/jFnUjEhxU1