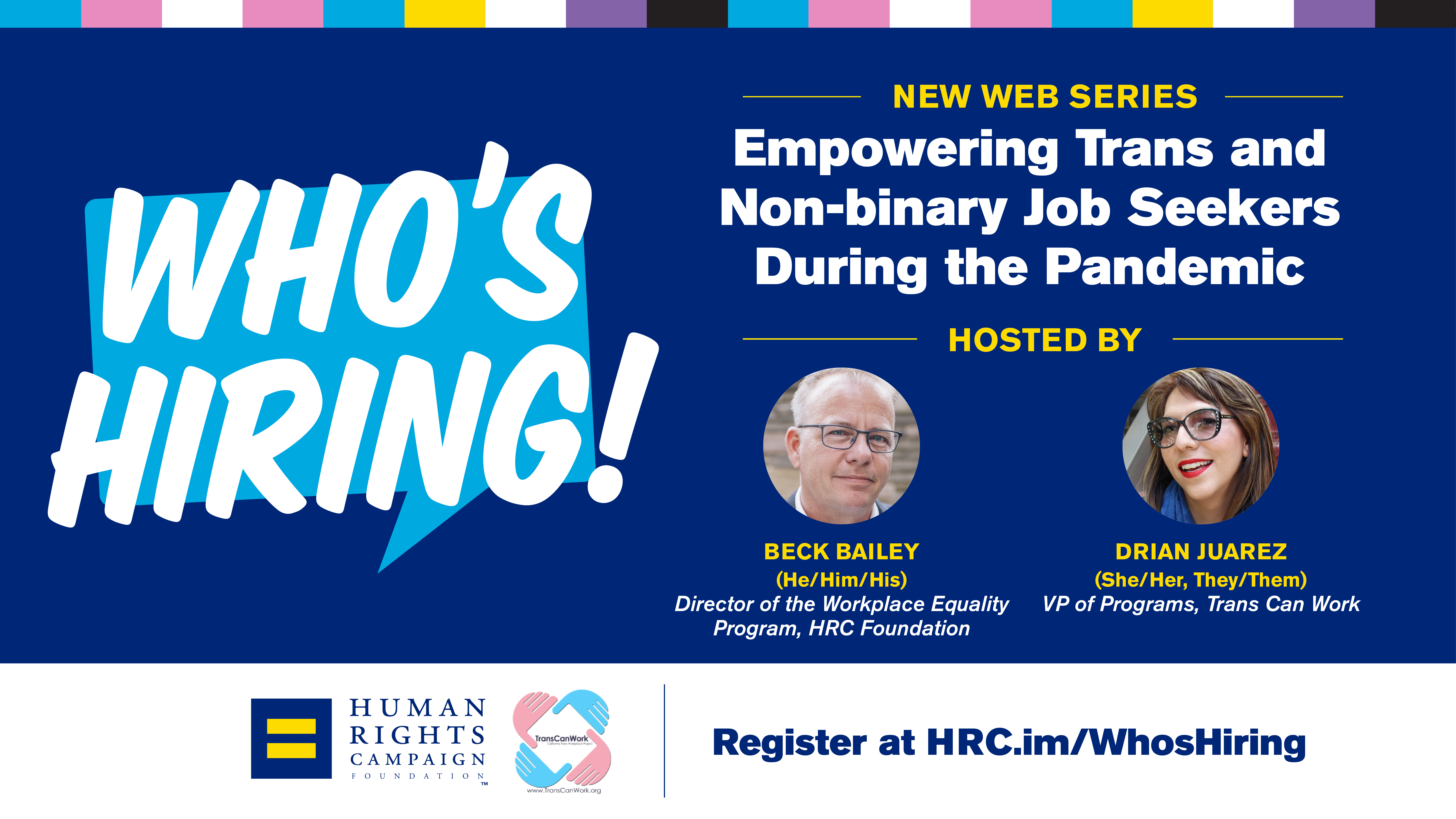 HRC alongside Trans Can Work, will begin to host a series of webcasts to highlight current employment opportunities and provide information on how to apply for those roles -- across all industries, roles and experience levels. In addition, this new initiative will provide job preparation resources such as on-demand sessions for resume prep and building interviewing skills. Those interested in registering for the upcoming webcast on May 6 can do so here.

“Transgender and non-binary people, particularly those of color, already experience higher unemployment and underemployment rates than their cisgender peers. With national unemployment soaring amidst the COVID-19 health crisis, the transgender and non-binary community stands to be further marginalized and cut off from economic security and opportunity,” said HRC President Alphonso David. “As HRC continues to call on elected officials to protect LGBTQ people from these disparities through legislation, we will continue to do all that we can to ensure our community has access to the resources to help weather this storm.”

"We are incredibly proud to be working with our partners at the Human Rights Campaign to meet this moment head on. While the challenges before us are considerable, together we are committed to providing transgender and non-binary communities with guidance and support to help navigate the changing economic landscape,” said Allison VanKuiken, Executive Managing Director for Trans Can Work.

New data released by HRC and PSB Research outlines the economic impact of COVID-19 on the LGBTQ community, showing that LGBTQ people are more likely to have experienced a cut in work hours, are more likely to feel their personal finances are in worse shape due to the pandemic and are more likely to be taking steps to actively prepare for the virus. In addition, data from the 2015 U.S. Trans Survey shows that transgender and non-binary Americans have long faced discrimination and economic hardship.

In response to the economic hardships facing the LGBTQ community, HRC is sharing resources to help people get through the pandemic. The new data builds on HRC’s previously released report, “The Lives and Livelihoods of Many in the LGBTQ Community are at Risk Amidst COVID-19 Crisis,” published in March. That report showed that LGBTQ people face both greater health and economic risks from the virus. They are less likely to have health coverage, are more likely to smoke and have asthma and have a variety of chronic illnesses. They are also more likely to work jobs in highly affected industries, often with more exposure and/or higher economic sensitivity to the COVID-19 crisis.