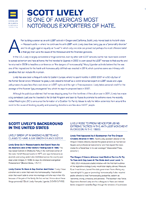 After building a career as an anti-LGBTQ activist in Oregon and California, Scott Lively moved back to his birth state — Massachusetts — where he continues his anti-LGBTQ work. Lively describes being gay as a “personality disorder” and his struggle against equality as “a war” in which only one side can prevail, but perhaps his most offensive belief is that gay men were the cause of the Holocaust and the Rwandan genocide.

In the U.S., Lively is largely considered a fringe extremist, even by other anti-LGBTQ activists, but he has never been content to spread extremism and hate at home. He first traveled to Uganda in 2002 to warn about the LGBTQ menace to that country and he returned in 2009 to headline a conference on “the dangers of homosexuality.” Many Ugandan activists believe that he was one of the inspirations for the harsh anti-homosexuality bill that was enacted in 2014, which punishes same sex intimacy with penalties that can include life in prison.

Lively has also been a frequent visitor to Eastern Europe, where he spent months in 2006-2007 on a 50-city tour of the former Soviet Union. Wherever he goes, Lively presents himself as a world renowned expert on LGBTQ issues and urges policymakers to pass laws that crack down on LGBTQ rights and the right of free expression. Lively takes personal credit for the passage of the Russian “gay propaganda” law, which he says he proposed back in 2007.

Learn more about Lively's notorious record of exporting hate by downloading a PDF of the full report.