WASHINGTON – Lost in yesterday’s dramatic progress for marriage equality was an equally dramatic rage spasm by Texas Senator and conservative heavy-hitter Ted Cruz. Today is a new day, however, and the Human Rights Campaign – the nation’s largest lesbian, gay, bisexual and transgender (LGBT) civil rights organization – is calling on the media to ask some follow up questions of Sen. Cruz’s colleagues.

First, the facts. After the Supreme Court announced yesterday that it would not hear any of the pending marriage equality cases, same-sex couples in the five effected states began lining up to finally take part in the constitutional right to marry. Most people were happy. Some people shrugged. Senator Ted Cruz was furious.

In a seven paragraph statement posted to his U.S. Senate website, Cruz unleashed a vein-popping outburst of anti-marriage animus not seen in this country since 2004. Cruz called the Supreme Court’s action “judicial activism at its worst,” “tragic and indefensible,” “preposterous,” and a “usurpation” by the courts.

What’s more, he called for sweeping federal legislation to un-marry countless thousands of committed and loving gay and lesbian couples—a bill to undo federal recognition of marriage equality and even wants to modify the U.S. Constitution to block marriage equality.

HRC believes this should be a wakeup call to the national media. And as recently as last year, Cruz was leading the pack for the GOP Presidential nomination in 2016.

So where do Sen. Cruz’s colleagues in the U.S. Senate stand on his constitutional anti-marriage equality amendment? Do other senators – people with the power to help bring Sen. Cruz’s manifesto to fruition – agree with him? Recently, libertarian Senator Rand Paul shrugged on the matter. House Speaker John Boehner shared the stage with an openly gay GOP congressional candidate at a fundraiser and managed to stay mum as well.

This silence is wrong. In fact, this silence is the untold story of yesterday’s dramatic events. Rank-and-file Republicans across America certainly disagree with Cruz. Poll after poll shows that majorities of Republicans and conservatives under 30 support marriage equality by significant margins. And a new ad by a conservative, pro-marriage equality organization shows that they are increasingly unafraid to raise their voices.

So on the day after yesterday’s historic progress, HRC is asking the national media to get answers. Ask some tough questions. Turn down the rhetorical heat, and instead shine some light on the important conversation taking place inside the GOP.

Marriage equality isn’t going anywhere. These loving and committed couples have value. We shouldn’t let a few rogue Republicans use them as a punching bag without facing scrutiny for it. 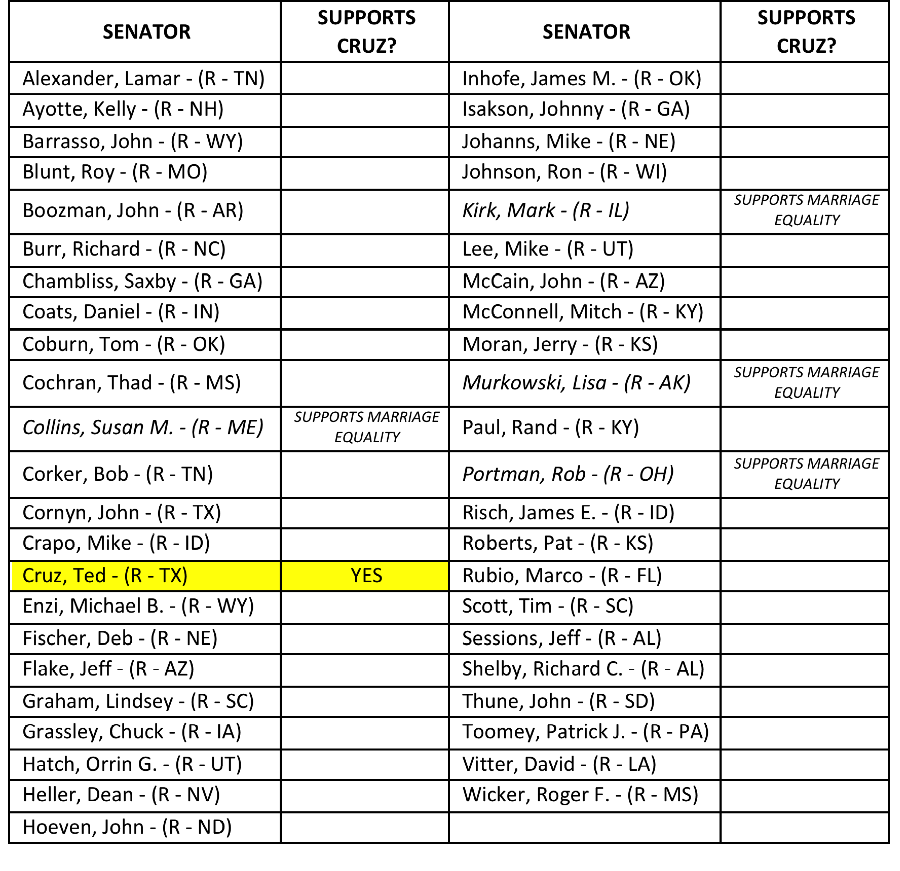