Virtually every other GOP candidate has spoken out on this issue; Ted Cruz, Mike Huckabee, Rand Paul, Bobby Jindal and Marco Rubio have defended Davis, while Lindsey Graham, Carly Fiorina and Chris Christie have said she should follow the law. Kasich said that the Supreme Court has settled the matter.

The promoted tweets will appear in Iowa, Washington, D.C., and the home states of Walker, Bush and Trump starting today. 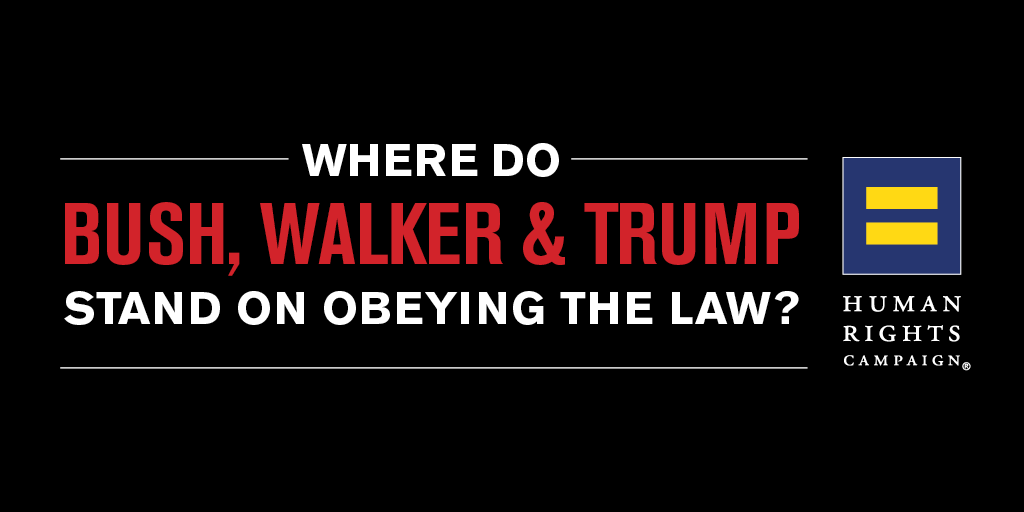 “Today’s court ruling is another reminder that we need a President who will appoint pro-equality judges who will properly uphold the rule of law. We’re a nation of laws, and marriage equality is the law of the land,” said HRC Communications Director Jason Rahlan. “Jeb Bush, Scott Walker and Donald Trump should say whether they support clerks being able to flout the law and stand between LGBT Americans and their constitutional right to marry the person they love.”

On August 12, U.S. District Judge David Bunning ordered Davis to immediately resume issuing marriage licenses, although he later temporarily stayed his order as Davis appealed his decision to not grant an emergency stay to the U.S. Court of Appeals for the Sixth Circuit – which declined her request on August 26. Davis then sought an emergency stay from the Supreme Court of the United States, which also denied her request on Monday night – the same day Judge Bunning’s original stay on the order expired.

Even after the stay expired, Davis has repeatedly defied the court and, citing “God’s authority,” refuses to allow any licenses to be issued by staff in her office.

Davis continues to be advised and represented by the vehemently anti-LGBT Liberty Counsel.

The Human Rights Campaign is America’s largest organization working to achieve lesbian, gay, bisexual and transgender equality. HRC envisions a world where LGBT people are embraced as full members of society at home, at work and in every community.