The Human Rights Campaign uses cookies to improve your site experience. By using this site, you agree to our use of cookies. To learn more, please read our Privacy Policy.
More Information
HRC, Civil Rights Leaders, Hundreds of Supporters Rally Against Trump’s #LicenseToDiscriminate Executive Order
Washington -- Today, the Human Rights Campaign, the nation’s largest lesbian, gay, bisexual, transgender, and queer (LGBTQ) civil rights organization, joined other LGBTQ organizations, civil rights leaders and hundreds of supporters in front of the White House to rally and speak out against Trump’s #LicenseToDiscriminate Executive Order that would put millions of LGBTQ Americans at risk. Yesterday, Politico first reported that Donald Trump is planning to sign his license-to-discriminate order targeting LGBTQ people and women tomorrow. 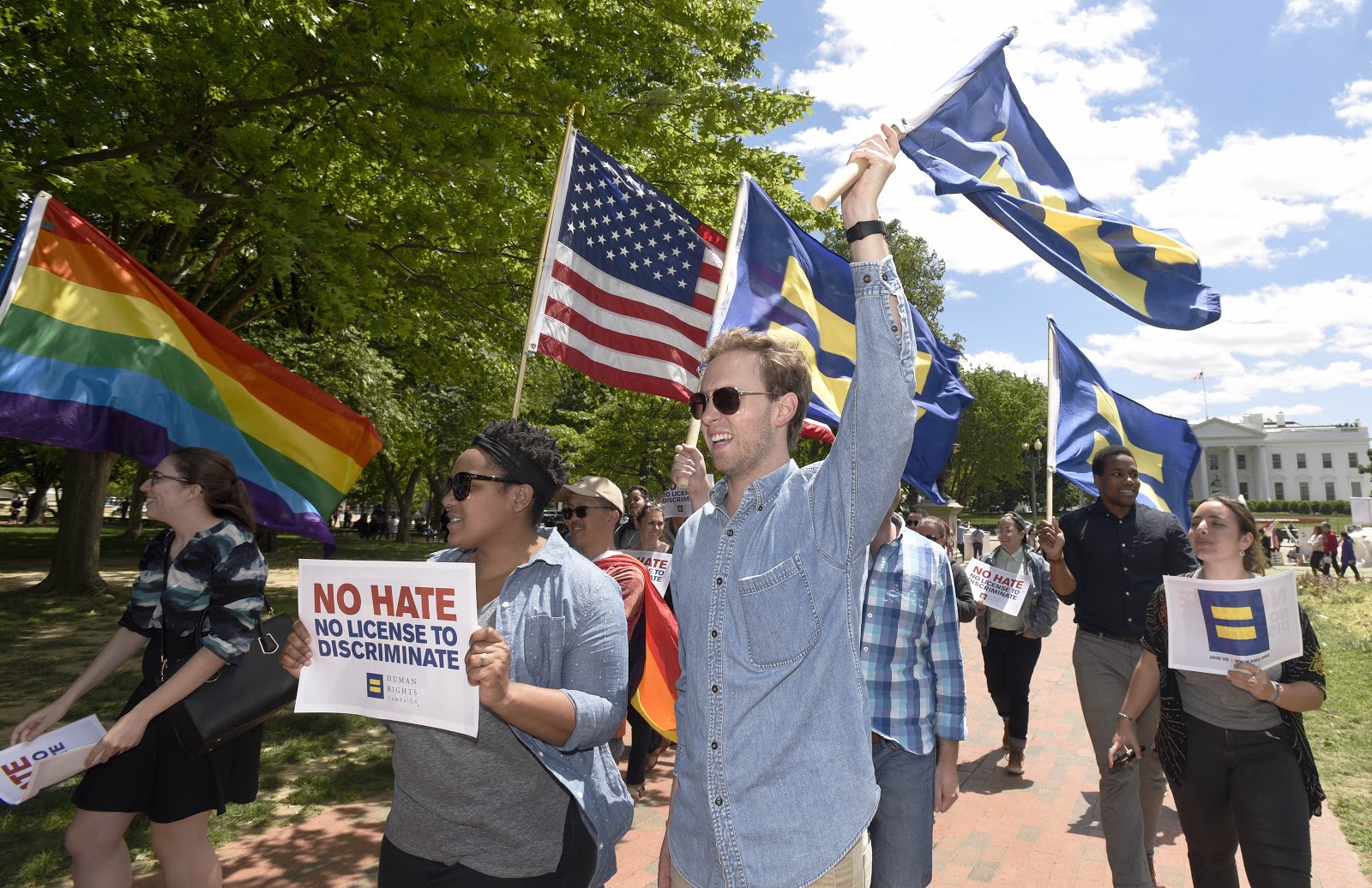 Civil rights activists rally and protest against #License to Discriminate near the White House on Wednesday, May 3, 2017, in Washington, D.C. (Steve Ruark/AP Images for Human Rights Campaign)
Already, more than 50 percent of Americans live in an area of the U.S. spanning 31 states where LGBTQ people are at risk of being fired, evicted or denied services because of who they are or whom they love -- two-thirds of LGBTQ people report having faced such discrimination in their lives. Just yesterday, the Equality Act was introduced which would finally explicitly add LGBTQ people to our federal civil rights laws and expand protections against sex discrimination. Instead of ending the patchwork of laws that harm LGBTQ people and their families, Trump is preparing an executive order that threatens to exacerbate these hostile climates and lead to broad, devastating impacts for LGBTQ people.
“Today the Human Rights Campaign and our nearly 2 million members are calling on Donald Trump to drop this proposed license to discriminate and stop his attacks on all our communities.” said Chad Griffin, President of the Human Rights Campaign. “We have all come too far, fought too hard, and accomplished too much to allow anyone to drag us backwards. We stand unified today, we stand unified tomorrow, and when Donald Trump attacks any one of us, he is going to keep hearing from all of us.” 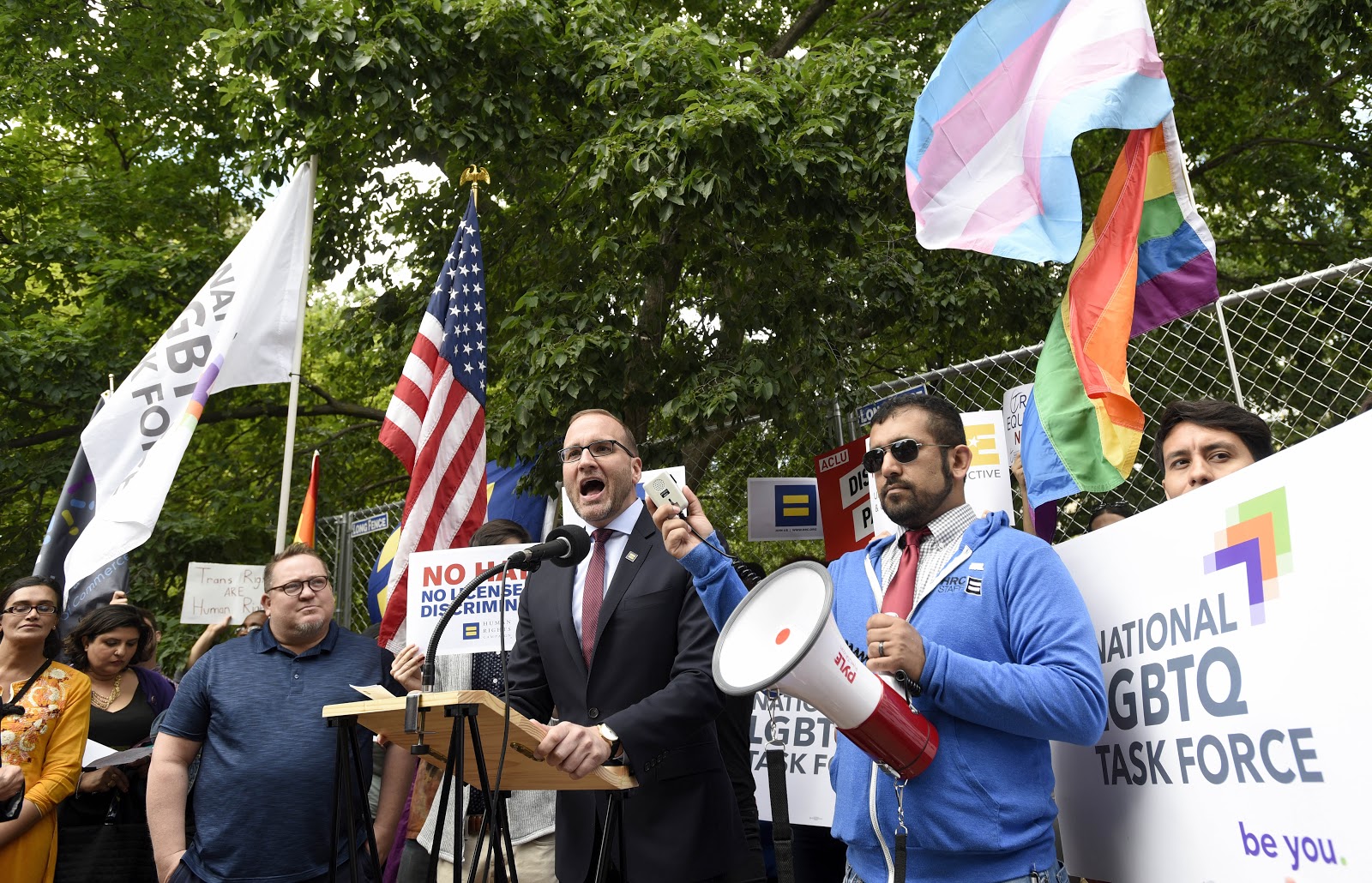 Chad Griffin, president of the Human Rights Campaign, speaks during a rally and protest against #License to Discriminate near the White House on Wednesday, May 3, 2017, in Washington, D.C. (Steve Ruark/AP Images for Human Rights Campaign)
Donald Trump’s license-to-discriminate order has reportedly been circulating within the White House and transition team since January and has been a longtime political priority of anti-LGBTQ organizations including the SPLC-designated hate group Family Research Council.
A preliminary analysis of the order leaked in January indicates that LGBTQ people and women will be at risk in the following:
The Human Rights Campaign is America’s largest civil rights organization working to achieve lesbian, gay, bisexual, transgender and queer equality. HRC envisions a world where LGBTQ people are embraced as full members of society at home, at work and in every community.
###