The Human Rights Campaign uses cookies to improve your site experience. By using this site, you agree to our use of cookies. To learn more, please read our Privacy Policy.
More Information
Today, the Human Rights Campaign (HRC), the nation’s largest lesbian, gay, bisexual, transgender and queer (LGBTQ) civil rights organization, continued calls for the Trump-Pence Administration to withdraw its nomination of Gordon Giampietro, an anti-LGBTQ extremist recently nominated to the U.S. District Court for the Eastern District of Wisconsin. HRC has released a new video highlighting abhorrent comments Giampietro made during radio interviews that previously went undisclosed to Wisconsin’s judicial nominating committee. 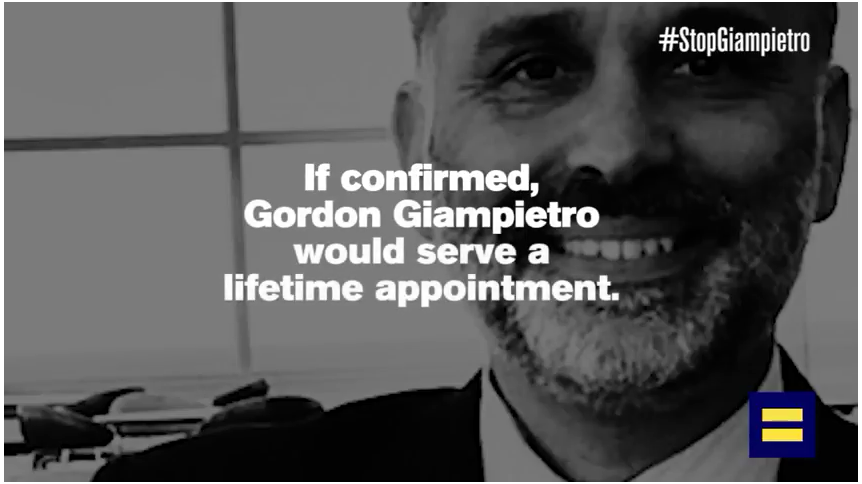 “Gordon Giampietro’s disturbing views against the LGBTQ community, women and other marginalized groups raise serious questions about his ability as a Judge to enforce equal treatment for all people under our laws,” said HRC Wisconsin State Manager Wendy Strout. “Someone who publicly and unabashedly voices contempt for equality and diversity has no place on the bench or in public office. HRC will continue to oppose Giampietro and other anti-LGBTQ nominees that the Trump-Pence Administration scrapes from the bottom of the barrel.”
Gordon Giampietro’s disparaging comments include referring to birth control as “an assault on nature,” saying marriage equality is “against God’s plan” and LGBTQ people are “troubled” and unfit to be parents. In online writings, Giampietro attacks a woman’s right to choose and criticized the Civil Rights Act of 1964, claiming that "calls for diversity" are "code for relaxed standards.”
The Trump-Pence administration has appointed and nominated scores of extreme and unqualified anti-LGBTQ officials to crucial agencies and court benches — some of whom will serve lifetime appointments. Giampietro’s nomination is part of a larger trend of Donald Trump nominating radical, anti-LGBTQ judges to the federal bench, including Jeff Mateer, Damien Schiff, Leonard Steven Grasz, Mark Norris, and Stephen Schwartz.