But that’s exactly what happened to Slivinski and another gay student, Thomas Swartz, who expressed a similar sentiment in his quote.

Kearney High School officials released a statement at the time saying that the quotes by Slivinski and Swartz were considered potentially “offensive” and that’s why they were removed from the yearbook. But under intense criticism for their actions -- including from the Kansas City Star editorial board, which accused the school officials of trying to erase the young men -- they eventually apologized.

The implication of school officials’ actions, however, was clear: there was something controversial, or “offensive”, about living openly as an LGBTQ person.

To his abiding credit, Bill Nicely, Kearney school district superintendent, recognized that an apology wasn’t enough to correct the misstep and immediately reached out to the HRC Foundation’s Welcoming Schools for guidance on next steps in making his district classrooms more welcoming and inclusive for LGBTQ young people.

What has happened since in Kearney has been encouraging and inspiring. This month, all elementary school staff in the Kearney School District were trained in the Welcoming Schools approach, and the HRC team will return to Kearney during the coming school year to complete follow-up training with staff at each of its four elementary schools, and hopefully also with middle and high school staff in the school district.

Nicely reflected on the experience, saying that the lessons helped him and the other educators “open the door to the very best version of all of us.”

"At (our) new staff convocation, I discussed the importance of creating schools where every child can grow into the very best version of themselves,” said Nicely.

“It was only a few days later, while participating with our staff in the Welcoming Schools professional development, that it occured to me that this mantra had a much broader meaning,” he continued. “The only way for each student to grow into their ‘very best version’ is to operate schools where no student is ever marginalized.”

Nicely said that the Welcoming Schools material gave Kearney staff the tools to address the myriad factors that lead to marginalization -- be it a child’s LGBTQ status, race or socioeconomic status.

For more information about creating LGBTQ-inclusive schools, or to bring Welcoming Schools to your school or district, contact us. 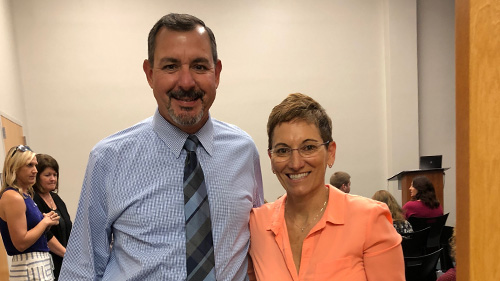