Alphonso David has been fighting for LGBTQ equality for his entire professional career.

This article first appeared in Equality magazine. Read the most recent issue at hrc.org/magazine.

Alphonso David has been fighting for LGBTQ equality for his entire professional career — his commitment to civil rights born out of his personal experiences as an immigrant, a refugee and a Black gay man.

When he takes the helm of the Human Rights Campaign in August, David will become the first civil rights lawyer and the first person of color to serve as HRC president in our organization’s nearly 40-year history.

It’s not the first time he’s made history — most recently, as the head of New York's Office of Civil Rights, Alphonso helped lead the fight to win marriage equality in the Empire State three years before the Supreme Court guaranteed that right to every American.

Under his watch, New York banned the abusive practice of so-called “conversion therapy” in minors, expanded Medicaid coverage to cover transition-related care, made it easier to amend gender markers on birth certificates, and enacted policies and regulations to support people living with HIV and drive new diagnoses to an all-time low statewide. 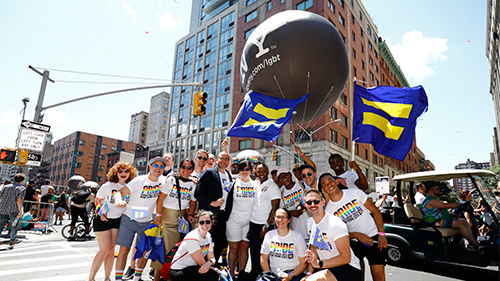 He has also helped lead efforts to expand access to reproductive healthcare, restore voting rights to New Yorkers, advance workplace protections for disadvantaged communities, and require access to free translation services in essential state services. Prior to his work for New York State, David served as a staff attorney at Lambda Legal Defense and Education Fund.

David has fought tirelessly to make New York a fairer, freer place for everyone. Now, he will lead the nation’s largest LGBTQ civil rights organization as our new president.

David has known from a very young age about the struggle for freedom and equality. He was born in the U.S. but grew up in Liberia, where his uncle and father were political leaders.

In 1980, his uncle was assassinated and his father was incarcerated during a violent military coup. At the age of 14, his family escaped Liberia for a new life in Baltimore. In Baltimore, he was acutely aware about what it meant to be different. He was often the target of ridicule.

“I soon learned what it meant to be different: an immigrant, an African and a Black person in the United States,” said David.

Eventually, he came to understand that he wasn’t just a Black man, an immigrant and a child of refugees. He was also gay.

“I had to, at a very young age, understand the purpose of life, the value of democracy, and really think about, ‘Why am I here? What am I going to do?’” said David.

He became a civil rights lawyer and built a career on fighting for equality. Despite monumental gains for LGBTQ equality in New York and across the country, we now find ourselves at a perilous time in our nation’s history.

Time and again, the Trump-Pence administration has attempted to undermine the rights of the LGBTQ community. They have banned brave transgender troops from serving in the U.S. military. They have nominated anti-LGBTQ extremists to judicial positions. They have remained silent on anti-LGBTQ violence abroad. They have targeted transgender and gender non-conforming people’s access to critical healthcare. And they are attacking children and parents in the child welfare system.

Meanwhile, anti-equality legislators at the state level are trying to ram through legislation that targets our community. There is an epidemic of violence that targets the transgender community, especially Black transgender women. 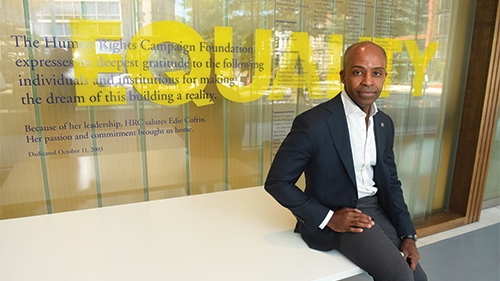 Since Donald Trump and Mike Pence took office, LGBTQ people have been under attack by an administration hellbent on ripping away our progress. David is ready to lead HRC as we take on Trump-Pence — and all foes of equality — together.

“I see a tremendous opportunity to overcome these attacks,” said David. “I believe in the single mother trying to access affordable healthcare for her family. I believe in the Black trans woman who is preparing for that big interview. I believe in the teenager wondering if others will see them as they see themselves when they look in that mirror. I believe in the construction worker who is building the courage to come out to his peers. And I believe in the young, queer immigrant who came to this country so that they could live authentically.

“I believe that together, all of us, we can harness the strength that’s inherent in our differences, to stand together in the face of fear and division,” said David.

Chad Griffin, HRC’s outgoing president, knows better than anyone what it takes to lead the organization and the challenges that David will face from day one in the position.

“Alphonso David is a brilliant strategist, leader and civil rights lawyer, a fierce and compassionate advocate for LGBTQ equality — and he’s someone I’ve truly admired for years,” said Griffin.

Alphonso David has served in New York Gov. Andrew Cuomo's administration since 2011. Starting in August, he takes the helm at the Human Rights Campaign.

Members of Congress, leaders of social justice organizations, celebrities and others lauded the Human Rights Campaign board’s selection and expressed excitement about next steps for David, HRC and the LGBTQ movement.

Vanita Gupta, the president and CEO of the Leadership Conference on Civil and Human Rights, pointed to David’s lengthy civil rights advocacy experience when she congratulated him.

In this crucial moment for our country & the fight for equality, Alphonso brings a tenacious determination & long track record of advancing civil rights. I look forward to working with him to continue defending our democracy & advancing equality. ✊��✊��✊�� https://t.co/KeHZjAaRgf

It won’t be long before David makes his first trip to Capitol Hill as HRC president to meet with members of Congress to talk about HRC’s legislative priorities such as the Equality Act, which would provide consistent and explicit non-discrimination protections for LGBTQ people across key areas of life, including employment, housing, credit, education, public spaces and services federally funded programs, and jury service.

Big congrats to #AlphonsoDavid! A great choice to spearhead @HRC at a critical time. Look forward to partnering together in the months and years ahead. https://t.co/pIKf9lL3Oa

Of course, HRC’s mission will always be to fight for full LGBTQ equality and nothing less.

“If we want to win full equality, that's going to require us to come together, to dig deep, to be resilient, to embrace our differences, to tenaciously defend the most vulnerable among us, to fight with every ounce of determination we have,” said David. “I promise you this, I will fight for each and every one of us. All I ask is that you join me, that you join the Human Rights Campaign in our fight for true equality. In unity, we will fight back and we will win.”

David shares how his life story and career as a civil rights attorney prepared him to lead HRC forward in a new video, Difference Is Our Strength. Watch it now at hrc.im/meetalphonsodavid.