On Wednesday, the New Hampshire House Health, Human Services and Elderly Affairs Committee overwhelming voted in favor of House Bill (HB) 478, which would add gender identity to the state’s non-discrimination law. The 15-2 vote came a day after a marathon hearing with dozens of supporters testifying in favor of the vital legislation.

In 1998, New Hampshire became a leader in equality, adding sexual orientation to its Law of Discrimination, which also provides protections based on race, color, national origin, religion, marital status, disability, age and sex in the areas of public accommodations, housing and employment. But it now lags behind all other New England states because it does not include protections for its transgender residents.​

The overwhelming support is a positive step toward making history in New Hampshire by updating its non-discrimination to protect the entire LGBTQ​ community.

At the hearing, the committee heard moving testimony from people across the state. Transgender residents spoke about the importance of these protections and how not having them has deeply harmed them, their families and communities. They testified along with business leaders, doctors, therapists, faith leaders and law enforcement officials. They called for this common sense expansion of the law to protect some of New Hampshire's most vulnerable people.

“Over my years in the legislature, I can recall few bills that have brought together a larger and more diverse coalition of stakeholders than HB 478,” Rep. Caroletta Alicea, D-Boscawen, told the committee.

The bill now moves to the state's H​ouse of Representatives, where a vote that is expected before or on March 9. HRC's Associate Regional Field Director, Ryan Rowe, has been on the ground working with a coalition of national and local advocacy groups that include GLAD, Freedom for All Americans, the New Hampshire ACLU, Transgender New Hampshire, and Rights and Democracy New Hampshire to help pass HB 478.

We now have a short window to ensure that House members who have not yet decided to support HB 478 hear the voices of fair-minded Granite Staters. And so we still need your help!

Above: People from across the state showed up for the hearing and rallied outside of Legislative Office Building in New Hampshire to show their support. 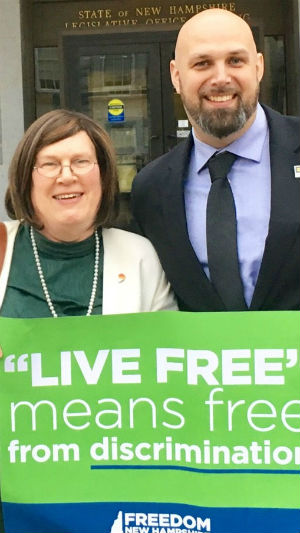