Police conduct hasn’t changed much in a century, and several blue ribbon commissions on police violence have said as much. Consider 1935 when a panel convened by then mayor of New York City, Fiorello LaGuardia, noted after a riot in Harlem was sparked by an incident of police violence:

In 1967, the Kerner Commission — also tasked with analyzing racism in policing—ended its final report with a statement of deep frustration from Kenneth Clark:

The fact is, we are still falling down the rabbit hole. Today, we can track this same stasis and frustration when it comes to policing and the LGBTQ community--a community in which some face multiple exposures to police violence based on race, sexual orientation and/or gender identity. Historically, the relationship between policing and the LGBTQ community has been deeply fraught: from the Cooper Do-Nuts riot in Los Angeles in May 1959, to Stonewall, to Lawrence v. Texas, the case that decriminalized sex between consenting men in private--the hallmarks of LGBTQ liberation in the 20th century have been marked by police enforcement of the criminalization of homosexuality and non-conforming gender expression.

Even now, in the 21st century, discrimination and harassment by law enforcement remains an ongoing and pervasive problem in LGBTQ communities. For example, a 2015 national survey of LGBTQ people and people living with HIV found that 73% of respondents had face-to-face contact with police in the past five years. Of those 73%:

Police abuse, neglect, and misconduct were consistently reported at higher frequencies by respondents of color as well as trans and gender-nonconforming respondents. While we hear that particular reality mentioned often almost as a tag line, white LGBTQ individuals experience higher levels of contacts with police as well; indeed, white LGBTQ people are five times more likely to be stopped by the police in a public place than their heterosexual counterparts and almost four times more likely to be stopped or approached by police generally. If it wasn’t clear before, it should be clear now: racial justice and police accountability comprise a very important layer of the fight for LGBTQ liberation and survival.

But we need not succumb to the age-old inaction. We are equipped with more tools than we have ever had to raise awareness of the breadth of police violence and misconduct that so many have lived with for decades. The more we hold our eyes open, literally and figuratively, the more we are able to hold police accountable for misconduct or overreach. From Daniella Frazier’s video, to the videos that showed us the truths in Philando Castile and Eric Garner’s killings, to the tens of millions of people—globally—who were on the streets exercising their first amendment right to protest in the wake of Derek Chauvin’s murder of George Floyd, our collective awareness can change inequity and unite us on the path of justice.

To this end, there are many ways to “keep your eyes open,” including cell phones, police watch apps, and community watch groups. These efforts, however, while necessary and welcome, are only stopgap measures to interrupt excessive force or misconduct. They are not solutions to the systemic ills in policing that continue to emerge in regular cycles. To remedy these more entrenched problems, you can join the broader call to advocate for accountability and transparency in policing, whether by establishing civilian complaint review boards with subpoena power in your town or city (giving people the authority to hold officers responsible for their actions), by asking for updated use of force policies in your state, or by demanding that police officers be required to wear body worn cameras. You can also ask your electeds to end qualified immunity (a legal doctrine that makes it nearly impossible to sue police for money damages), and demand that police not be tasked with carrying out traffic stops or or handling mental health crises, interactions that could be handled by unarmed, trained professionals, thus diminishing the opportunity for police interactions to turn dangerous or deadly.

The hope, at the end of the day, is that the transformations currently happening to watch the watchmen will create a clear and strong foundation for police accountability. Recordings of police officers--whether by bystanders or individuals who are themselves interacting with officers, or members of the press--are invaluable, indisputable tools in that fight. Often, it’s the video alone that can lead to disciplinary action, firing, or prosecution of an officer. We know it is effective because the pushback from police unions has been strong; but it is the demand for those cameras—those eyes—that have always helped push the arc of justice.

While George Floyd’s life might seem foreign to some, his humanity cannot. It is the thread that pulls us both back in time and propels us forward. His struggle may not be ours, his life not one we can experience or maybe even comprehend. But our eyes on his struggle should remind us of our own fragility, and that a violation for one person could easily become our own. 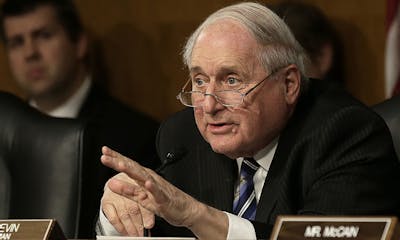