This post was written with the help of Aneesha Pappy, Tyler Brindamour and Kate Weis.

At least 34 openly LGBTQ+ athletes will participate in the 2022 Beijing Olympic Games. According to Outsports, the number of out athletes has nearly doubled since the 2018 Pyeongchang Games, and overall Olympic LGBTQ+ visibility has increased dramatically. A record-setting 186 out LGBTQ+ athletes participated in the Tokyo Summer Olympics in 2021.

At the start of the Olympic Games, there will be at least 34 openly LGBTQ+ athletes competing in nine different sports. These athletes represent 14 countries, including the United States.

Notably, Timothy LeDuc will be the first openly non-binary athlete to compete in the Winter Olympic Games.

The Olympic Games are a celebration of country and sport. With LGBTQ+ representation in the Olympics on the rise, we celebrate the courage and strength of LGBTQ+ athletes who are able to compete on the world stage. Coming out as LGBTQ+ in sports can be challenging, especially in countries where openly identifying as LGBTQ+ can be life-threatening.

This list reflects information compiled by Outsports and LGBT historian Tony Scupham-Bilton. The full list from Outsports can be found here.

Megan Banks (@megan.bankes) is an openly queer biathlete representing Team Canada who uses she/they pronouns. After coming out as gay in an Instagram post in 2020, Bankes hopes to show younger athletes “that they can be whomever they are, or want to be, without discrimination.” They are competing in their first Olympics this year and have previously competed in several World Championships.

Bruce Mouat (@BruceMouat) is a curler for Team Great Britain competing in his first Olympic Games. Mouat has boasted an impressive pre-Olympics career, recently finishing first in the 2021 World Mixed Doubles Championship amongst other competitions.

Filippo Ambrosini is an out figure skater representing Team Italy. The 2022 Olympic Games mark his first time competing on this global stage, previously earning multiple titles with his skating partner, Rebecca Ghilardi. Ambrosini and Ghilardi have placed in the top 10 at two European Championships and won three ISU Challenger Series medals together.

Kévin Aymoz (@kevin_aymoz) is a five-time French national champion who will be competing for Team France in figure skating. Aymoz is openly gay, coming out in the documentary “We Need to Talk” in 2021. The 2022 Olympic Games mark his first time competing at the Olympics.

Jason Brown (@jasonbskates) is an openly gay figure skater representing Team USA. Brown previously competed in the 2014 Sochi Olympics, earning bronze and becoming one of the youngest male figure skating Olympic medalists, and was a first alternate for the 2018 Olympic Games.

Lewis Gibson (@Lewisgibson4) is an openly gay figure skater representing Team Great Britain. This will be the first Olympics competition for the four-time British national champion.

Amber Glenn (@amberglenn_) is a figure skater for Team USA who identifies as both bisexual and pansexual. Glenn came out in December 2019 after an interview with The Dallas Voice. In Beijing, Glenn will be part of the team as a first alternate.

Timothy LeDuc (they/them) is making history as the first openly non-binary athlete to participate in a Winter Olympics. LeDuc is a pairs figure skater for Team USA and will compete with their teammate Ashley Cain-Gribble after their win at the U.S. National Championship. In an interview with NBC Sports, they said, “My hope is that the narrative shifts more to, queer people can be open and successful in sports. We’ve always been here, we’ve always been a part of sports. We just haven’t always been able to be open.”

Paul Poirier (@PaulDPoirier) is an openly gay figure skater on Team Canada. Poirier has spoken about wanting to be “a role model for so many young queer athletes who are growing up and not really sure how to navigate that as they go through the world of sport.” This will be Poirier’s third Olympics following Vancouver and Pyeongchang.

Simon Proulx Sénécal (@simseneca) is a Canadian-born figure skater that will be representing Team Armenia at the Beijing Olympic Games. The 2022 Games will be the first for the out Armenian national champion.

Eric Radford (@Rad85E) is a two-time world champion and Olympic gold medalist representing Team Canada at his third Olympic Games after initially retiring from competitions in 2018. Radford made history as the first competitive figure skater to come out as gay while still competing for championship titles in 2014, paving the way for future LGBTQ+ athletes to come out.

Brianne Jenner (@bjenner19) is an ice hockey player and will be playing for Team Canada at the Beijing Olympic Games. This will be Jenner’s third trip to the Olympic Games following a gold medal win in 2014 and a silver medal in 2018.

Erin Ambrose (@ambrose_13) will play ice hockey for Team Canada at her first Olympic Games in Beijing. As part of Team Canada, Ambrose won a gold medal at the Four Nations Cup tournament.

Ebba Berglund (@ebba_berglund) is an out Swedish ice hockey player who will be playing for Team Sweden at the Beijing Olympic Games. She grew up in the coastal Swedish city of Örnsköldsvik, which is notorious for being home to elite Swedish athletes, and Berglund is no exception.

Alex Carpenter (@carpy05) is an out Olympic silver medalist and will compete for Team USA. Alex previously represented Team USA in the 2014 Olympic Games, bringing home a silver medal.

Emily Clark (@emclark13) is an out ice hockey player for Team Canada. Clark is a Canadian silver medalist, and she continues to use her platform to promote hockey and uplift women in sports.

Mélodie Daoust (@melodaoust15) is an out ice hockey player entering her third Olympics for Team Canada. Daoust hails from the French-speaking province of Québec and is hoping to come home with a third gold medal after winning gold and silver medals in Sochi and Pyeongchang, respectively.

Anna Kjellbin (@annakjellbin) is an out ice hockey player for Sweden. Kjellbin is a professional hockey player and has the potential to compete against her girlfriend of over two years, Ronja Savolainen, who will compete for Team Finland.

Aneta Lédlová (@aneta.ledlova) is an out ice hockey player from the Czech Republic, also known by its short-form name Czechia. Lédlová recently celebrated eight years with her partner Janna Ra and the first birthday of their daughter.

Jamie Lee Rattray (@ratt26) is an out ice hockey player for Canada. After being left off the roster for Pyeongchang, she earned her spot for the Beijing Games as a valuable goal-scorer.

Ronja Savolainen (@ronjasavolainen) is an out Finnish ice hockey player who could compete against her girlfriend Anna Kjellbin, who plays for Team Sweden. After being diagnosed with ADHD, Savolainen has used her platform to advocate for and destigmatize neurodiversity on and off the ice.

Micah Zandee-Hart (@followyourhart_8) is an out ice hockey player for Canada. Zandee-Hart, a 2020 Cornell graduate, will play in her first Olympic Games this winter. In doing so, she will become the first British Columbia-born player to play for the Canadian National Team in the Winter Olympics.

Andrew Blaser (@andrewblaser) is an openly gay skeleton slider for Team USA. Before initially taking up skeleton as a joke, Blaser was a volleyball player, cheerleader and decathlete. Blaser is looking forward to participating in Beijing and hopes to bring home a medal for Team USA.

Kim Meylemans (@LilBelgianKim) is an out skeleton slider from Belgium. Her biggest competition this Olympic season will be her girlfriend Nicole Silveira, who competes for Brazil.

Nicole Silveira (@nicole_silveiral) is an out Brazilian skeleton slider. After winning gold in the Skeleton Intercontinental Cup last November, Silveira is hoping to take home the gold for her country and edge past her girlfriend, Kim Meylemans, who will be competing in the same event for Belgium in Beijing.

Daniela Iraschko-Stolz (@danieiraschkostolz) is an out ski jumper from Austria who won a silver medal in the Pyeongchang Olympics. She is a proud LGBTQ+ advocate and married her wife in 2013.

Makayla Gerken Schofield (@gs_ski) is a pansexual skiier for Team Great Britain. She is one of three skiing siblings and will compete in Beijing with her sister Leonie.

Gus Kenworthy (@guskenworthy) is an openly gay freestyle skier and a dual citizen of Great Britain and the United States. After winning a silver medal in Sochi and participating in the Pyeongchang Games for Team USA, Kenworthy will be competing for Team Great Britain this time around to honor the country where he was born and to celebrate his British mother. Kenworthy received the HRC Visibility Award at the 2017 Utah Gala.

Belle Brockhoff (@bellebrockhoff) is an openly lesbian snowboarder for Team Australia. After claiming top honors at the 2021 World Championships, she is hoping to get the gold in Beijing. Brockhoff came out in 2013 and has been using her platform to call for LGBTQ+ equality at the Olympics and around the world.

Sarka Pancochova (@sarkasnow) is an out slopestyle snowboarder for the Czech Republic, also known by its short-form name Czechia. She is a three-time Olympic athlete and an X Games silver medalist. Pancochova lives in Breckenridge, Colorado, to train on the slopes and last summer she married her now-wife, Kaileen.

Brittany Bowe (@BrittanyBowe) is an out speed skater for the United States. She is a six-time world champion, a world record holder and an Olympic bronze medalist. She was the first out American in the 2022 Games and is hoping to add to the bronze medal that she won in the 2018 Olympics.

Ireen Wüst (@Ireenw) is an openly bisexual speed skater for the Netherlands. Wüst is recorded as the youngest Dutch Olympian to win a gold medal in the history of the Winter Games. In the 2018 Olympics, she was not only the first out athlete to win a medal, but she also became the most decorated LGBTQ+ Olympian of all time. 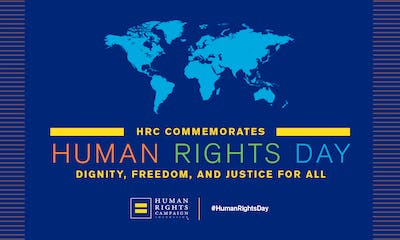