The Texas Rising program challenges college students from 13 different Texas schools to organize around the issues that matter to them and move their communities to be civically engaged.

Featured speaker Montserrat Garibay, Executive Director of Educate Austin, highlighted her experience as an undocumented student turned educator and activist in the state. She empowered attendees to continue organizing towards a Texas that is welcoming and fair to all people - regardless of color, immigration status, sexual orientation or gender identity.

The LGBTQ community is as diverse as the fabric of our nation. We are Muslim. We are Jewish. We are women. We are black, white and Latino. We are immigrants and we are people with disabilities. We make up all communities in Texas and represent many of the groups being targeted by the Texas Legislature.

It is critical we continue to work in coalition and continue to support groups who recognize these intersections, promote a culture of civic engagement and empower Texans to take action in their communities.

TFN, which was found by Cecile Richards, and HRC have been working in coalition to stop bills that single-out transgender and LGBTQ Texans for discrimination. Both field teams have worked hand-in-hand to coordinate rallies, connect constituents to their legislators, and guide supporters of equality through multiple daylong hearings. HRC is proud to elevate the work being carried out by our TFN counterparts, their student organizers and work alongside this great team on the ground.

To learn more about how to get involved in Texas during the Special Session, contact HRC Texas field organizer Sissi Yado at sissi.yado@hrc.org. 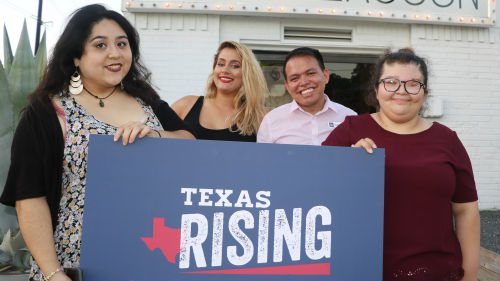