HRC has more than a dozen staff in Austin for the special legislative session, including members of our national field organizing team who are joining HRC’s seven Texas-based organizers.

This week, HRC has more than a dozen staff in Austin for the special legislative session, including members of our national field organizing team who are joining HRC’s seven Texas-based organizers. Together, we are working side by side with other progressive coalition partners such as Equality Texas, ACLU of Texas, Texas Freedom Network, and the Transgender Education Network of Texas.

We have been at the Texas Capitol each day demanding that legislators reject a number of  anti-transgender bills, including SB3 and SB91. To fight these discriminatory bills, we have also hosted daily phone banks urging HRC members to contact their legislator and recruiting Texans to attend the committee hearing and testify against this legislation. 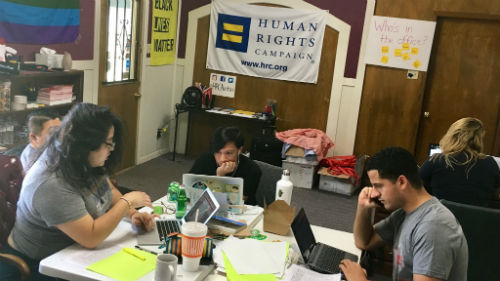 This past Tuesday, we joined the One Texas Rally with other coalition allies to show Texas how unified we are in coming together to fight discrimination in all its forms - targeting women, immigrants, and LGBTQ people in particular. I had the honor of meeting former Texas State Senator Wendy Davis and thanked her for continuously standing with the LGBTQ community and our allies. 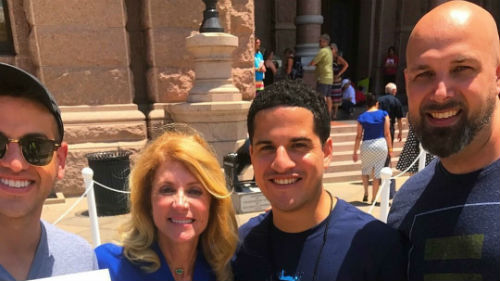 It has been an amazing experience working alongside a diverse set of groups here in Texas. The speakers represented a wide range of issue areas being worked on by United We Dream, Planned Parenthood, and members of the faith community, just to name a few.

Last month, Texas Governor Greg Abbott announced a special session to discriminate against transgender Texans. Throughout the regular legislative session, more than 30 anti-LGBTQ bills were introduced and 11 passed at least one chamber. In comparison, all other states combined passed only 13 bills through at least one legislative chamber. It’s disappointing that Governor Abbott has decided to bring legislators back to Austin to waste taxpayer time and money to discriminate against LGBTQ Texans. Even the business community has voiced its opposition, IBM stated that it will oppose “any measure that would harm the state's LGBT community and make it difficult for businesses to attract and retain talented Texans”.