Despite a foot of snow on the ground, advocates from across the city joined together at the Co-Prosperity Space in Bridgeport to share their stories and experiences about working in their neighborhoods for progressive causes. One attendee from the neighborhood spoke about his work to support Marie Newman, an HRC-endorsed candidate for Congress, who is facing anti-LGBTQ Democratic Representative Dan Lipinski in this year’s primary on March 20.

On Sunday, a large crowd gathered at the Center on Halsted in Boystown for our second round of training. Attendees included new faces from across the city, as well as advocates from Wisconsin who made the trek to bolster their work for HRC-endorsed openly gay Senator Tammy Baldwin in her bid for re-election this November.

With so many important races this year, supporting and electing pro-equality candidates has never been more important.

For more information about our elections work or upcoming volunteer opportunities in Chicago and beyond, contact HRC’s Lindsey Clark at lindsey.clark@hrc.org. 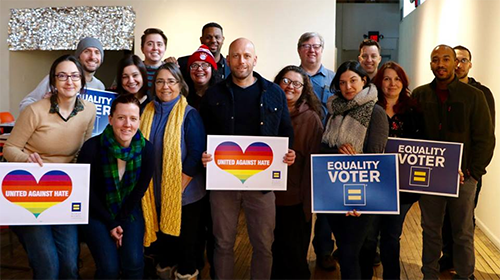