Todd Litton is the clear choice for fair-minded Texans who want a leader committed to restoring common sense and common decency by putting people ahead of politics.

“Todd Litton is the clear choice for fair-minded Texans who want a leader committed to restoring common sense and common decency by putting people ahead of politics,” said HRC National Field Director Marty Rouse. “With the proven experience, dedication, and commitment needed to move fairness and equality forward, he will stand up in Congress for all of the hard-working families in his district, throughout Texas, and across the nation. HRC is proud to endorse Todd Litton.”

"I am honored to receive HRC’s endorsement,” said Todd Litton. “In Congress, I would support and actively fight for the Equality Act. The LGBTQ community has made significant strides in recent years, but we still have a ways to go in combating discrimination. I’m heartened that voters I've talked to all over the district are supportive of our LGBTQ family, friends, and neighbors. I am proud to be a part of a community that believes in freedom and fairness for all of our neighbors.”

As a sixth generation Texan who has served on numerous nonprofit boards and committees, Litton is a proven leader in the community. His leadership in the education and nonprofit fields has been recognized by national leadership and fellowship programs with the Children’s Defense Fund and the Aspen Institute, across the state with the Texas Lyceum, and locally with the American Leadership Forum and Center for Houston’s Future. If elected to Congress, Litton has pledged to support comprehensive, nondiscrimination protections for LGBTQ people, including policies to continue allowing transgender people to serve freely in the military. Find out more about Litton’s support for LGBTQ equality here.

Across the state of Texas, HRC has identified more than 1.7 million “Equality Voters” — meaning they are strong supporters of progressive LGBTQ policies including marriage equality, equitable family law, and laws that prohibit discrimination on the basis of sexual orientation or gender identity. Last year, HRC announced a coast-to-coast campaign to mobilize these voters for the midterm elections called HRC Rising, which represents the largest grassroots expansion in the organization’s 38-year history. 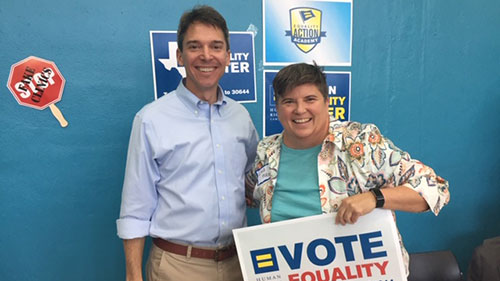