Rep. Luján signed on as a co-sponsor and voted in favor of the Equality Act, crucial federal legislation that would finally guarantee explicit, protections for LGBTQ people under our nation's existing civil rights laws.

Today, HRC announced its endorsement of Rep. Ben Ray Luján in his bid for the U.S. Senate.

Rep. Luján has been a steadfast ally for the LGBTQ community throughout his time in public service and his tenure in the U.S. House of Representatives. In 2018, Luján signed on as a co-sponsor and voted in favor of the Equality Act, crucial federal legislation that would finally guarantee explicit, protections for LGBTQ people under our nation's existing civil rights laws. Luján has demonstrated unprecedented leadership for transgender immigrants by standing up against Trump's draconian policies. These policies have disproportionately harmed transgender migrants, who have faced violence by being forced to live in facilities that do not provide services consistent with their gender identity.

“Congressman Luján has been one of our community's strongest advocates in the United States House of Representatives, and we’re proud to stand by his side as he runs for the Senate,” said HRC President Alphonso David. “As a co-sponsor of the Equality Act, Congressman Luján’s demonstrated record of support for LGBTQ people and families stands in stark contrast with his opponents, who have refused to support non-discrimination protections for LGBTQ people despite over 73% of New Mexicans supporting those protections. The Human Rights Campaign is committed to mobilizing the nearly 439,000 Equality Voters across New Mexico to send Congressman Luján to the U.S. Senate to continue moving equality forward for all Americans.”

“I am deeply humbled to receive the support of the Human Rights Campaign - a venerable ally in the ongoing fight to achieve equality for all lesbian, gay, bisexual, transgender, and queer individuals,” said Congressman Ben Ray Luján. “The Human Rights Campaign was a critical partner during the 2018 cycle as we worked to secure a House Democratic majority that reflected the diversity of our country. When in the U.S. Senate, I will continue to advance legislation like the Equality Act that secures the innate civil rights of all people.” 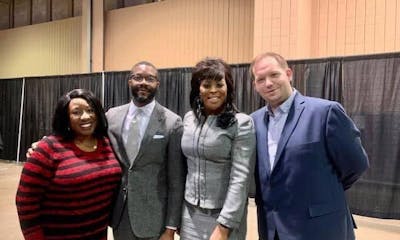