HRC's first staff electoral deployment of 2018 is complete, and a second team has just finished in Milwaukee turning out Equality Voters for the primary election in Wisconsin.

Text “VOTER” to 30644 to verify your voter registration status, find your polling place and receive election reminders. For more information on how to get involved, sign up to volunteer or join an advocacy training, visit HRC’s Equality Voter Action Center.

HRC's first staff electoral deployment of 2018 is complete, and a second team has just finished in Milwaukee turning out Equality Voters for yesterday’s primary election in Wisconsin.

During our time in Ohio, HRC met and worked with incredible volunteers who have been organizing, calling and knocking doors in their communities for months. On election night, HRC-endorsed candidate Danny O'Connor even recognized the HRC team and thanked them for their work knocking doors over the weekend.

.@HRC is proud to be on the ground to support pro-equality champion @DannyOConnor1. #OH12 pic.twitter.com/GHWEiZeSPb

While we won't know the official results won’t be announced until all provisional and absentee ballots are counted, the fact that O’Connor is within the margin of error is a huge victory and a wake up call to anti-equality candidates everywhere.

With just 83 days until the election, HRC has prioritized investments and organizing in six key states in the 2018 cycle, and has already put staff and resources on the ground. HRC has identified more than 52 million “Equality Voters” -- voters who support LGBTQ-inclusive policies including marriage equality, equitable family law and laws that would prohibit discrimination on the basis of sexual orientation and gender identity.

If you need inspiration to help turn out Equality Voters, check out what the HRC staff deployed to Ohio had to say about their experience working on the ground:

"Getting the chance to go interact with the people, volunteers and voters who are working alongside us to move our mission forward was a really refreshing and encouraging experience."

"On election night, where the race was too close to call and the result showed less than a percentage point difference in votes between the two main candidates, it was clear that every door knock, phone call and conversation with voters truly mattered."

"The best part of being deployed was getting to know people in a very real and human way -- from spending time with people outside of the office, drinking lemonade made by a fellow volunteer or showing a picture of your dog to someone while canvassing (a real thing that happened). There's nothing that brings out the importance of connecting with others more than working on a campaign."

"Working and living in Washington, D.C., I've recently found myself feeling disheartened or pessimistic about our political system. I'm so glad that mentors within HRC encouraged me to sign up and even more grateful that I had the opportunity to go out to Ohio and work on a campaign with a great HRC team. I knew that it would be hard work, but I had no idea just how rewarding it would be to knock on doors and meet parents, senior citizens, young people and energetic local organizers who all realize just how important this moment is in our democracy."

Supporters in any state can text “VOTER” to 30644 to verify their voter registration, find their polling place and receive election reminders. For more information on how to get involved, sign up to volunteer or join an advocacy training, visit HRC’s Equality Voter Action Center. 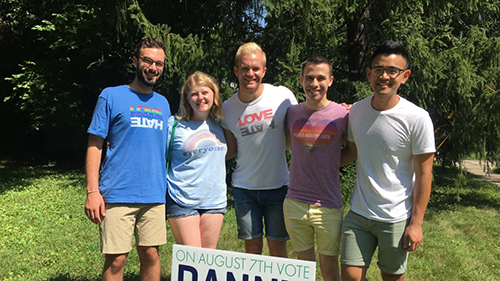 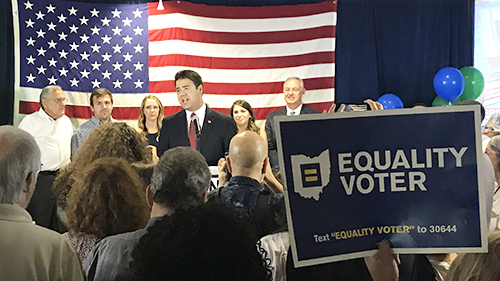 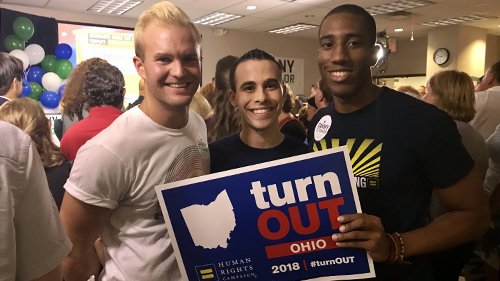