HRC field staff was thrilled to be in Phoenix, Arizona, to celebrate the ribbon cutting for the new home of one•n•ten.

HRC field staff was thrilled to be in Phoenix, Arizona, to celebrate the ribbon cutting for the new home of one•n•ten. One•n•ten, an LGBTQ youth center, was set on fire in an arson attack in July.

HRC was honored to support one•n•ten’s journey to their new home.  It was an honor to be in Phoenix to celebrate the grand re-opening alongside the local community including Phoenix Mayor Greg Stanton, one•n•ten Executive Director Linda Elliott and HRC Youth Ambassador Justin Jones.

One•n•ten’s work is vital for the local LGBTQ community. In far too many areas across the country, LGBTQ youth lack access to food, shelter, health services that are imperative to their sexual health and well-being.

HRC launched HRC Rising, the largest grassroots expansion in its history that will include significant investments in Arizona ahead of the 2018 midterm elections. Join the movement at hrc.org/resist. 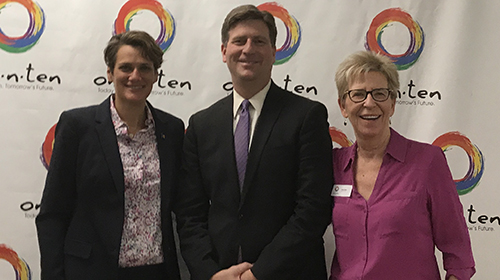