Approximately 50 HRC member and supporters in Arkansas gathered for a unique Valentine’s Day event to engage with their local representatives for “Legislator Speed Dating.”

On Wednesday, approximately 50 HRC member and supporters in Arkansas gathered for a unique Valentine’s Day event to engage with their local representatives for “Legislator Speed Dating.”

“When I received an email from HRC concerning a local legislator speed dating event, I have to admit it peaked my curiosity,” said Michelle Palumbo, a local transgender activist. “There were about twelve legislators in attendance. Each representative sat at a table and had seven minutes to speak and answer questions from each group, when the time was up they rotated clockwise to the next table of constituents. As it turned out, seven minutes was not nearly enough time, but we kept to the rules.”

The event took place at the party room at U.S. Pizza in Hillcrest and hosted in partnership with the Stonewall Democrats of Arkansas and the Democratic Arkansas Black Caucus.

Strong coalition work with allies is exactly what is needed during the current climate in the Natural State. Engaging our lawmakers and our community is an important step in fostering an environment of acceptance and inclusion for LGBTQ people in Arkansas.

“The discussions and interactions at my table were lively, informative and covered the spectrum of political topics as the legislators rotated through,” Palumbo continued. “In less than two hours we met face-to-face with legislators from across the state and learned of their projects. We were presented with their input into current bills on the floor. I hope to see more of this format in the future. Speed dating, who would have thought?”

The event was such a success that HRC Arkansas plans to take this to other communities throughout the state and extend invitations to municipal and county leaders as well as school board members.

If you missed this opportunity, but would still like the opportunity to speak with your state legislators, make sure to sign up for one of HRC Arkansas’ upcoming rolling lobby days on February 23, March 2 and March 9. 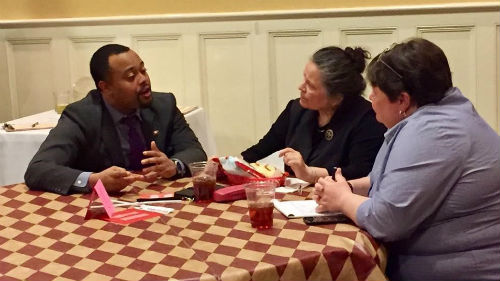