On Wednesday, Oct. 21 I was honored to host my first event for HBCU OutLoud Day. Because of the current state of America with COVID-19, and due to CDC guidelines, the event was hosted virtually, but this did not stop participation.

I hosted a game night consisting of multiple Black LGBTQ+ and HBCU queer life trivia questions. The top three winners won an HBCU OutLoud Day bundle, while the rest of the participants got to choose two gifts of their liking. Although I was only a host for the trivia night, as a Black LGBTQ+ student I learned a lot. As I started researching Black LGBTQ+ trivia questions, I noticed it was like trying to find a needle in a haystack. So many Black LGBTQ+ leaders are hidden and overlooked even though we have been the front runners of every single monumental moment in American history.

It’s crazy to believe that so many names have been forgotten, but our impact is everlasting. Something I never knew was the history of Bayard Rustin — the fact that he was an openly gay man during the civil rights era took a strength I can only dream about. This man accomplished so much while having two targets on his back; he was even a key contributor for the March on Washington. Something that hit a little closer to home was the fact that Barbra Jordan, the first Southern African-American woman elected to the United States House of Representatives, was a gay woman. Though she never came out publicly, she was very open about having a female partner. It’s astonishing to believe that I had no idea one of my icons was also a part of the LGBTQ+ community. There are so many great Black LGBTQ+ leaders in America, but we will never even know they were queer because history wants to hide that from us.

Something else that shocked me is that a lot of students who attended the game night had no idea about Stonewall. More than 50% of the players had never even heard the name Marsha P. Johnson, and that was the moment I realized how important HBCU OutLoud Day actually is. If we as a Black queer community aren’t learning about ourselves, how can we possibly be proud and understand how great we are? To me, this day is about more than just being queer at an HBCU, it’s about realizing our worth and able to express ourselves freely. A big part of being free is knowing our history. Our history has yet to be taught in the school system, so we must teach it to ourselves. As a community, we can’t forget that Black history also includes Black queer history.

I was honored to not just educate myself with this event but also the students around me. This was an amazing opportunity given to me by the HBCU division of the Human Rights Campaign and I can’t wait for next year. 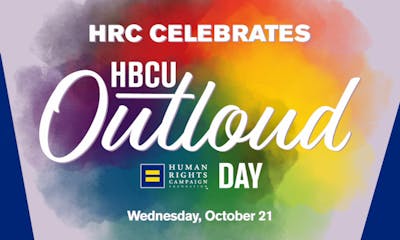