Here are some key dates and things to keep in mind if you are a voter in the Municipal Primary Election in Charlotte.

The City of Charlotte is gearing up for the September 12 Municipal Primary Election in which Charlotteans will cast their ballot for mayor, city council districts 1, 2, 4, 5, 6 and four city council at large members.

If you live in Charlotte, you can cast your ballot today! Here are some key dates and things to keep in mind:

Charlotte is the second largest city in the U.S. without LGBTQ-inclusive non-discrimination protections. Mayor  Roberts has been a staunch LGBTQ advocate in her support for non-discrimination protections and continuous fight against anti-LGBTQ legislation HB2 and HB142. We know that Charlotte needs a pro-equality mayor that will fight for all Charlotteans, without compromise. So that’s why we fully support Mayor Roberts bid for re-election and encourage you to do the same.

If you live in Charlotte and would like to join HRC volunteers in getting out the vote to re-elect Mayor Roberts, contact HRC Regional Field Organizer, Hope Jackson at hope.jackson@hrc.org.

Featured above: Mayor Roberts accepting the endorsement for mayor from HRC, Equality NC and MeckPAC. 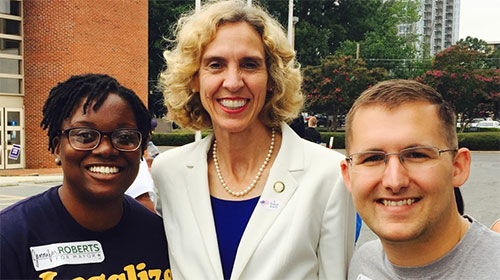