After 16 years of living in South Carolina, a couple relocated to Houston, Texas.

This year, after 16 years of living in South Carolina, my husband and I relocated to Houston, Texas, in April. I’ve heard it said, “I wasn't born in Texas but I got here as fast as I could” and can honestly say I am starting to feel the same way.

I’m no stranger to Texas. In 2015, my work was heavily focused on the Lone Star State, first fighting anti-LGBTQ legislation with our coalition partners in Austin. Later that year, I spent three months living in Houston as HRC’s lead staff member on the Houston Equal Rights Ordinance campaign.

This year, I’ve worked alongside HRC’s Texas Field Manager David Topping and our entire HRC Texas field team as we set up offices in Houston, Austin, Dallas and San Antonio to mobilize HRC supporters across the state to fight back during the regular legislative session. Now that legislators are back at the Capitol for the special session, I’ve been spending more time in Austin supporting the HRC Texas field team and our dedicated coalition partners including Equality Texas, Texas Freedom Network, ACLU of Texas and the Transgender Education Network of Texas.

When the Senate held over 12 hours of testimony on anti-transgender legislation known as SB3, I watched with a newly-found Texas pride as hundreds of passionate LGBTQ people along with their families, faith leaders, co-workers and friends descended on the Capitol and waited for their turn to speak out against discrimination. Our supporters far outnumbered those who opposed equality.

I believe Texas is better than this debate over anti-LGBTQ bills and that extreme legislators who push these issues do not truly reflect the values of the Lone Star State.  I’m grateful for the opportunity to work for HRC and for the investment that our organization is putting into fighting discrimination in my (new) home state. With just days left in this special session, we are not letting up the pressure to ensure that there’s #NoHateInMyState.

HRC has more than a dozen staff on the ground in Austin, and, working with scores of volunteer organizers, has been leading field organizing efforts around the state to defeat anti-LGBTQ bills. Text "TX House" to 30644 today and tell your Texas State Representative to oppose all anti-LGBTQ bills amendments during the last days of the special session. 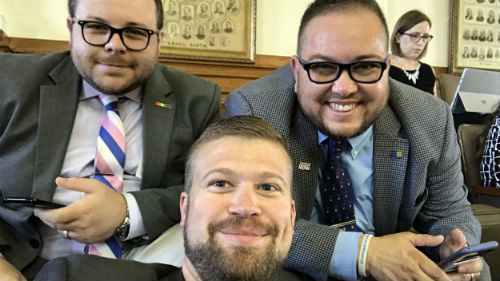 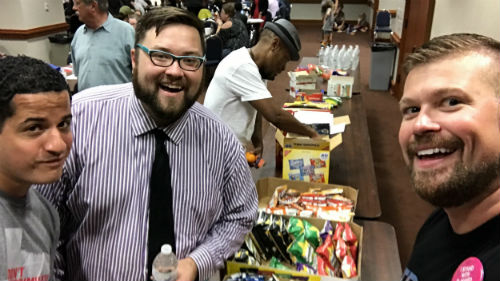 Helping provide refreshments for volunteers testifying against SB3 so they could stay longer and stay energized.