Equality Virginia and HRC issued the following statement to mark the beginning of Virginia’s 2019 legislative session.

Today, Equality Virginia and HRC issued the following statement to mark the beginning of Virginia’s 2019 legislative session, where legislation is set to be introduced that would prohibit discrimination on the basis of sexual orientation or gender identity in housing and public employment for LGBTQ Virginians. Similar legislation has previously passed in bipartisan fashion in the Virginia Senate. Over the past several elections, Equality Virginia and HRC have worked to elect pro-equality champions at every level of Virginia’s state government.

“Now is the time for the Commonwealth of Virginia to finally pass basic, but important, nondiscrimination protections for LGBTQ Virginians,” said James Parrish, Executive Director for Equality Virginia. “Lawmakers from both parties agree: it is essential that our laws promote fairness and reflect the views of the majority of Virginians who believe LGBTQ people should be able to work and live free from discrimination. This session, we hope to see the will of the people force action from our elected officials.”

“This legislative session, Virginia’s lawmakers have a chance to stand up for fairness and equality,” said Marty Rouse, HRC National Field Director.  “It’s essential for the future of Virginia that pro-equality legislators in the House and Senate act on the commonsense proposal to ensure that long-overdue protections are passed. These are basic non-discrimination protections that LGBTQ Virginians need and deserve, and that will make the commonwealth a more welcoming and inclusive place for all Virginians.”

The commonwealth is one of thirty-one states that currently lacks basic non-discrimination protections for LGBTQ people in employment, housing, and public accommodations. 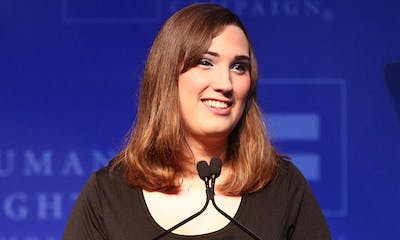 Sen. Sarah McBride on Making History and What the Future Holds for Trans Lawmakers