The event is held in partnership with the American Counseling Association and the National Education Association, with AT&T, BBVA Compass and Toyota as presenting sponsors. In its fifth year, HRC Foundation’s premier national event addresses safety, inclusion and well-being for LGBTQ and questioning youth, and brings together youth-serving professionals to discuss best practices for working with and caring for LGBTQ youth and their faimilies in schools, community centers, health care settings and beyond. 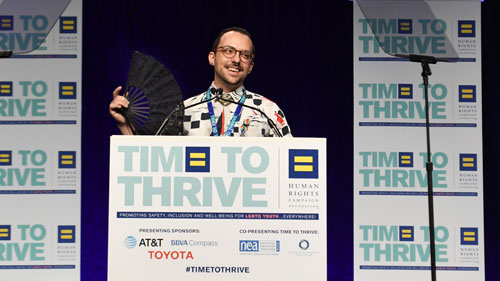 We must realize our differences are our #STRENGTH. God made us exactly the way God wanted us to be. It's okay to celebrate you and be your #AUTHENTIC self. It's time to thrive! @HRC pic.twitter.com/ikoAX8FEDd

The Time to THRIVE contingent spent the remainder of the morning in breakout training sessions and workshops – including on the legal rights of LGBTQ youth in K-12 public schools and creating LGBTQ-inclusive schools, resisting racism in our communities and achieving an HIV-free generation.

There are not enough words in the world to express what it means to have my daughter’s Kinder teacher present at @HRC #TimeToThrive. Teachers save lives. #ThankATeacher #LGBTQ pic.twitter.com/6XpwzPAiuO

Additionally, producer and author Jacob Tobia facilitated a panel discussion on non-binary and gender non-conforming idenities with HRC Youth Ambassadors Sean Bender-Prouty, Sameer Jha, Jonathan Leggette and Tyler Yun. The group discussed navigating the gender spectrum and what it means for each individual to identify as non-binary or gender non-conforming.

"Gender is like ice cream, there's a whole spectrum of flavors and toppings." Producer and author @JacobTobia hosts a non-binary panel discussion with @HRC Youth Ambassadors during the #TimeToTHRIVE afternoon plenary. pic.twitter.com/HpVL4YdGGH

Following an afternoon of workshops, the night concluded with screenings of the movies “Crowning Change: The Erin O’Flaherty Story” and “15: A Quinceañera Story with Zoey Luna,” followed by question-and-answer sessions with O’Flaherty and Luna, respectively.

Time to THRIVE is the premier national convening of educators and youth-serving professionals to build awareness and cultural competency, learn current and emerging best practices and gather resources from leading experts and national organizations in the field. Time to THRIVE is taking place Feb. 16-18, 2018 at the Hilton Orlando Bonnet Creek in Orlando, Florida.

Read our Time to THRIVE Day One recap here.

Matthew Shepard will never know his story changed the trajectory of my life; solidified in me a knowing that I could not live in this world without working everyday to make it safe for ALL people. So honoured to meet Judy and Dennis Shepard at #TimeToTHRIVE. pic.twitter.com/ldt7WTPSFe

Today we are speaking at the Luncheon giving our all to represent Two-spirit people and our families. We are looking forward to our future endeavors together. ♥️♥️ #TimeToThrive #HRC #TwoSpirit #Sweethearts

“We’ve made diversity and inclusion a priority at @BBVACompass because it is a business imperative. That purpose of opportunity would mean nothing if we didn’t stand for equality along with the @HRC.” -@ReyOcanas #TimeToTHRIVE pic.twitter.com/fm5lDsNutU

Ever feel like there’s more on the inside that people may not see? Love the Welcoming Schools program for helping elementary kids students learn about identity and acceptance. @HRC #TimeToTHRIVE pic.twitter.com/hVNGDvdd74