On National Native HIV and AIDS Awareness Day, HRC recognizes the impact that the HIV and AIDS epidemic has had on Indigenous communities.

As a queer Asdzáá Diné [Navajo woman] and sexual health educator at Planned Parenthood of the Rocky Mountains, Rebecca Jones works to raise awareness about HIV and AIDS within Indigenous communities.

“It’s important to me and a lot of Indigenous folks because it shows visibility that HIV is also within our Indigenous communities,” Jones, who’s a member of the Diné Navajo Nation, told HRC. “A lot of times when people are talking about HIV prevention, American Indian and Alaskan natives are always kind of on the back burner -- or not even mentioned at all… So it’s fighting for that visibility.”

March 20 is National Native HIV and AIDS Awareness Day, when we recognize the impact that the HIV and AIDS epidemic has had on Indigenous communities throughout our country.

According to the Centers for Disease Control and Prevention, the Native community had the fifth highest rate of HIV diagnoses in the U.S. in 2015 -- higher than both Asian and white communities. Furthermore, gay and bisexual men accounted for 79 percent of HIV diagnoses among Native individuals.

“Along with becoming an educator, I started to recognize a lot of the health disparities that are within my community Navajo Nation area where I’m from,” Jones said. “HIV was considered a gay white man’s disease so a lot of Indigenous communities thought it wasn’t going to come into our reservations. With cultural taboos, no one wanted to talk about it, because if we talked about sexual health topics like HIV, community members thought it might come into their communities. However, we want to let Indigenous community members know that taking care of your sexual health is just like taking care of any other health problem. Now a lot of people, especially elders, are starting to see why we need to talk about it because HIV impacted a lot of Indigenous communities pretty hard.”

With her expertise, Jones works to raise awareness and remove stigma about HIV and AIDS within her community. Jones notes that Indigenous communities face a lack of resources, transportation and other barriers to accessing health care, which make it difficult to get rapid HIV testing and see physicians who can prescribe PrEP, the once-daily pill regimen that prevents HIV.

“It’s hard to provide healthcare and access for HIV prevention and AIDS if we are not visible through data. That visibility is important for our identity and access. We are precious, resilient and powerful,” she said. “Getting yourself tested not only shows how much you care for yourself, but of your community as well.”

In addition to getting more equitable access to care, visibility matters. This National Native HIV and AIDS Awareness Day, HRC honors advocates such as Jones who are working to bring visibility and awareness about HIV and AIDS within Indigenous communities.

“I’d like to give my gratitude to Indigenous two-spirit, trans and queer folx who have been doing this work tirelessly,” Jones said. “We are not to be forgotten or romanticized. We experience the same health disparities that other ethnicities and races face, but at higher rates. Ayóo anííníshní shik’éí dóó shidiné’é [I love you my friends, family and relatives].”

HRC is committed to working with our allies, partners, members and supporters to end the HIV epidemic and the stigma surrounding HIV. Learn more about HRC’s work to end HIV and HIV-related stigma here. 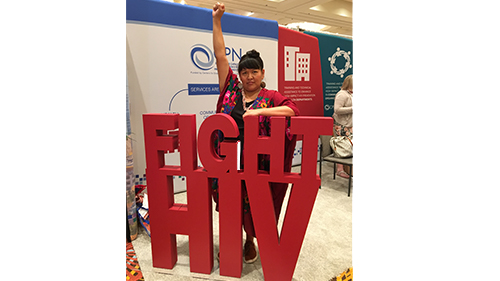