Backed by an overwhelming majority of Americans, the nation's leading companies and 288 national and statewide organizations, the critically important bipartisan legislation prioritized by Speaker Pelosi would finally ensure LGBTQ people are protected under the nation’s civil rights laws

HRC hailed the historic support for the Equality Act — critically important bipartisan legislation that would finally provide clear, comprehensive non-discrimination protections for LGBTQ people under our nation's civil rights laws. Set to be reintroduced in Congress today by Representatives David Cicilline (D-RI) and Brian Fitzpatrick (R-PA) in the House and Senators Jeff Merkley (D-OR), Tammy Baldwin (D-WI) and Cory Booker (D-NJ) in the Senate, the measure has unprecedented support from nearly 70 percent of Americans, more than 280 members of Congress, 165 major businesses and 288 statewide and national organizations. Speaker Nancy Pelosi (D-CA) has made passing the Equality Act a top priority for the new Congress.

“The harsh reality is that LGBTQ Americans still face real and persistent discrimination in their everyday lives,” said HRC President Chad Griffin. “The new pro-equality majority in Congress has the chance to finally ensure LGBTQ people’s rights are not determined by what side of a city or state line they live on. With the unprecedented backing of 70 percent of Americans, more than 280 members of Congress, 165 leading businesses and 288 organizations from across the country, now is the time to pass the bipartisan Equality Act.”

Discrimination is a real and persistent problem for LGBTQ Americans. HRC polling has found that nearly two-thirds of self-identified LGBTQ Americans report experiencing discrimination. Currently, 50 percent of LGBTQ Americans live in the 30 states that still lack statewide legal non-discrimination protections, leaving their residents and visitors at risk of being fired, denied housing, or refused service because of who they are or whom they love. The Equality Act would guarantee existing civil rights laws apply to LGBTQ people by providing clear, consistent non-discrimination protections based on sexual orientation or gender identity across key areas of life, including employment, housing, credit, education, public spaces and services, federally-funded programs and jury service.

More than 160 major corporations have joined HRC’s Business Coalition for the Equality Act. While the overwhelming majority of America’s leading businesses are already addressing workplace fairness for LGBTQ employees, these major employers know how important it is to have a federal legal standard that guarantees all employees have the same protections -- no matter where they live. The slate of companies endorsing the Equality Act have combined operations in all 50 states, headquarters in 27 states, and collectively generate $3.8 trillion in revenue. In total, these companies employ more than 8.7 million people across the U.S.

Recent polling finds that a growing majority of Americans support federal non-discrimination protections and LGBTQ equality. A recent survey by PRRI found that nearly seven in 10 Americans support laws like the Equality Act. In addition, post-election polling from HRC found that 60 percent of voters in the 2018 midterms opposed the Trump-Pence administration’s reported plans to define gender entirely by birth gender, thereby potentially excluding transgender people from civil rights protections. Overall, voters also identified protecting the rights of groups targeted by the Trump-Pence administration as their top reason for voting to flip the U.S. House of Representatives. Leading up to the 2018 midterms, HRC worked to mobilize those voters through the largest and earliest grassroots deployment in the organization’s 39-year history. Following these historic efforts, House leadership identified the Equality Act as a top legislative priority for the new pro-equality majority. 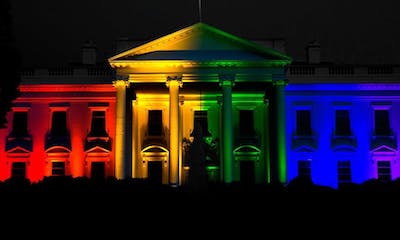