SB 201 and AB 99 both received their full Senate floor votes on Equality Day. SB 201 would prohibit state-licensed mental health providers from engaging in so-called “conversion therapy” with minors. Conversion therapy, sometimes known as “reparative therapy,” is a range of dangerous and discredited practices that falsely claim to change a person’s sexual orientation or gender identity or expression. Such practices have been rejected by every mainstream medical and mental health organization for decades, but due to continuing discrimination and societal bias against LGBTQ people, some practitioners continue to conduct conversion therapy.

AB 99, which will land next on the governor’s desk, would require foster parents to be trained on working with LGBTQ youth and require state and local agencies and facilities to treat a child in accordance with their gender identity.

To cap off an exciting day in Carson City, Steve Amend, who serves as HRC Las Vegas’ Political Co-Chair, received the Assembly Proclamation on behalf of all Equality Day participants from Assemblyman Nelson Araujo. HRC appreciates and applauds Steve on his continued leadership in the Silver State. 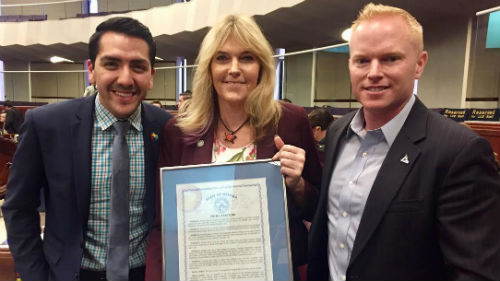