This article was written by the HRC Foundation's Writer and Content Manager Violet Lhant. As a person of trans and autistic experience, her dual identities inspire her advocacy.

Before I came out as queer, being autistic taught me the power of resilience. For those of us in both communities, our identities are often intertwined in how they allow us to see the world and in how we are viewed by others. Neurodivergent people often see the world differently, and it’s from that wellspring that so many of us discover different ways to love and express our identities. That’s why I’m reflecting on how the LGBTQ+ and autistic communities can learn from and empower each other as fellow travelers outside the norm.

From an early age, people around us tend to notice our differences before we even have the words to describe ourselves. Before learning the expectations of a neurotypical, cisgender and heteronormative society, the natural behavior of LGBTQ+ and autistic children is frequently cast as unusual and, unfortunately, deviant. When I look back on my life, a narrative emerges of continuously clawing my way out of a pit of conformity. At the same time, teachers punished me for autistic behavior, and bullies in the schoolyard hurled out homophobic slurs. It was a war on two fronts, an alliance to assert the value of my existence despite the demands of those around me. I learned that to survive we must boldly carve out spaces where we can express ourselves with pride.

Autistic people and LGBTQ+ people challenge societal norms simply by existing. It’s no wonder that concerted efforts to change or “cure” us have been invented for both of our communities. In the LGBTQ+ community, the scourge of conversion therapy is well known, but autistic people often face similar abuse from therapies ostensibly designed to help them. I’m proud of my career as a writer, but for most of my childhood, writing was the only way I could fluently communicate.

After receiving an autism diagnosis in 7th grade, I quickly saw my speech therapy classes turn into something sinister. Classes designed to develop my skills turned into an attempt to change my fundamental character. I was to be taught to comply with the strict norms of neurotypical society despite behaving in ways necessary for my own comfort. Several hours each week were to be spent telling me that I was broken and in need of fixing. Faced with abuse, I discovered the power of civil disobedience. Betrayed by my trusted therapist, at one of our sessions I wrote a letter explaining my opposition, slid it to her side of the desk and refused to say a word. When my parents sought another therapist for me, I could see his attempts at infantilization and removal of consent from the first session. I spent the entire session pretending to be somewhere else and my parents finally realized that attempts to change me would be futile.

Countless autistic adults report similar childhood traumas. As an adult, I learned about the autistic self-advocacy community and the wider disability rights movement. I learned that Ole Ivar Lovaas, one of the pioneers of therapies designed to treat autism, also practiced conversion therapy on gender non-conforming boys in order to prevent them from coming out as gay. I also learned about the long history of LGBTQ+ people who fought against stigmatizing medicalization, including the civil disobedience employed by gay activists that led the American Psychiatric Association to declassify homosexuality as a mental disorder in 1973.

That’s why as an LGBTQ+ advocate, autistic self-advocacy provides me with a framework for liberation. Autistic people are more likely than non-autistic people to be part of the LGBTQ+ community, but our LGBTQ+ identities are often doubted as mere expressions of autism rather than valid identities on their own. According to a study by The Trevor Project, about 5 percent of LGBTQ+ youth reported having been diagnosed with autism and another 35 percent said they believe they may be autistic. The study found that among this group, suicide rates were significantly higher compared to non-autistic people.

Autistic self-advocacy is a way to reclaim the narrative of our lives from those who seek to oppress us. This includes LGBTQ+ autistic people whose queerness is dismissed by those who seek our infantilization. Like those in the LGBTQ+ community, autistic people also form chosen families, often online, but also among neurodiverse people who recognize their common struggles. In our quest to self-actualize, we find allies who affirm our differences instead of seeking to suppress them. But perhaps the bond between our communities is most visible in our shared symbolism. Autistic self-advocates have adopted a rainbow infinity sign to represent the beauty of neurodiversity and as a rebuke to the stigmatizing puzzle piece symbols used by many autism-focused organizations.

We are not puzzles to be deciphered or made whole, but glorious individuals deserving of acceptance as we are. For me, the rainbow represents the infinite wonder and validity of all of our identities, both queer and neurodiverse. We must celebrate the experiences of our communities and forge a path forward for our collective freedom. 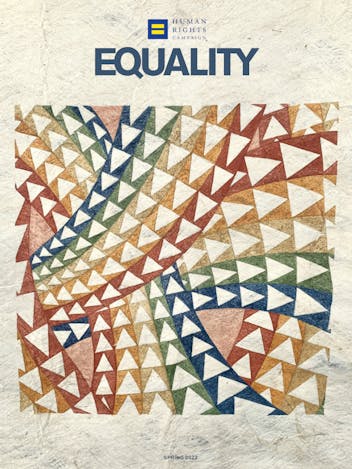