In May, years into a global pandemic the scope of which we hadn’t seen in our lifetimes, a new pox virus, first discovered in 1958 but not well known to the general public, started making headlines. As we would learn, MPox (monkeypox) was spreading rapidly from human to human by close skin-to-skin contact, especially among gay and bi+ men and transgender individuals who have sex with men.

Just weeks into the outbreak, HRC members and supporters were reaching out and expressing deep concerns and asking questions about what they needed to know about the MPox virus. Torrian Baskerville, HRC’s director of HIV and Health Equity, also started to receive calls from gay and bisexual men who were impacted — including BIPOC members of the community who already face severe health disparities.

“I talked with someone…who was exhibiting symptoms and was turned away from testing or treatment at the health department because there were no more appointments, even though they did everything right – even arrived within the provided time-frame,” said Baskerville. “Another individual was afraid of eviction because they struggled to pay rent after being denied paid medical leave three times, but wasn’t able to work due to being isolated for 25 days. These experiences are those of Black and Brown LGBTQ+ identified individuals located in highly impacted areas.”

As we closely monitored the concerning spread of the virus among our community, we quickly learned that care providers — and even some local health departments — did not have adequate information or resources to advise or treat their patients with concerns about MPox, even those who were exhibiting symptoms. There were reports of people being turned away from the appropriate care or diagnosed with entirely different diseases because of the initial lack of provider education.

While health departments awaited crucial information and educational resources from the Centers of Disease Control and Prevention, there were two immediate issues impeding ability to curb the spread: the scarcity of vaccines, called JYNNEOS, and an extremely limited testing capacity.

The federal government’s vaccine stockpile was insufficient to vaccinate the most impacted populations fully. Replenishing vaccines from the overseas provider was going to take months, and the doses we had would not be enough to meet demand.

Alongside the vaccine shortage, testing capacity was hampered by not having commercial labs on board and by red tape the care providers faced to secure tests. This issue was coupled with a severe and historical lack of funding for sexual health clinics and community based organizations, which were now tasked with serving a growing number of individuals looking for MPox treatment and help after having been largely depleted by COVID.

As news came out that the most impacted populations were within the LGBTQ+ community, we saw a concurrent rise in misinformation, disinformation and stigmatization online.

As challenges and fears mounted, HRC mobilized to help the community.

HRC immediately built an MPox resource page on our website to combat misinformation. Additionally, we began outreach to reporters, so they could better understand the scope of the virus’s impact on our community, what resources were needed from officials, and how to talk about the virus in a stigma-free way.

We knew from past public health emergencies and the history of our health care system that BIPOC communities would most likely be left behind regarding treatment and vaccine distribution. HRC was the first leading LGBTQ+ advocacy organization at the time to call for a comprehensive, equitable vaccination rollout plan.

In a press conference hosted by the National Coalition of STD Directors on August 2, 2022, HRC’s Torrian Baskerville urged government officials to do better.

“In communities across the country, we’re seeing a system that is responding best for the people who have the resources and time to seek accurate information, testing, vaccines and treatment,” said Baskerville. “Every time there’s a public health emergency, we see lower-income and BIPOC LGBTQ+ people being sidelined — unable to receive care and treatment in a timely manner.”

These disparities among multiply marginalized populations are not new — they are an unacceptable continuation of COVID response, the HIV epidemic, and other prior public health crises. The data continue to underscore the effect of systemic racial disparities on our overall public health preparedness and response measures. The data again highlight the urgent need to change a deeply flawed health care system that historically best serves those with resources and connections.

In response, HRC has been on the frontlines pushing for an equity-centered response to MPox by calling out disparities and holding our elected leaders accountable for their response efforts; hosting a listening session in partnership with the CDC so that our community could get timely information directly from experts; creating educational videos for social media, some of which feature deputy White House MPox coordinator and CDC official Dr. Demetre Daskalakis; sending a letter signed by 116 LGBTQ+, health and religious advocacy organizations to the White House and Congress pushing for increased action and funding; and partnering with Gilead Sciences and several partner organizations to provide educational resources for our community to help stop the outbreak.

HRC’s efforts are ongoing. We are working with community-based organizations to connect them with resources they need going into the future and to partner with them to further vaccine uptake in communities most impacted.

MPox can be fully contained and eradicated, but it takes a whole-of-government, equitable approach to make that happen. In short, our public health system must prioritize meeting people where they are both now and in the future by partnering and funding the community organizations and clinics that help their communities every day. Our community is resilient and we’ll continue to fight MPox, with the goal of leaving no one behind. We’re in this together.

Learn more about HRC’s work in the fight against MPox 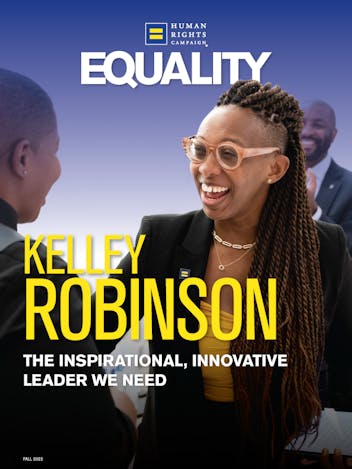