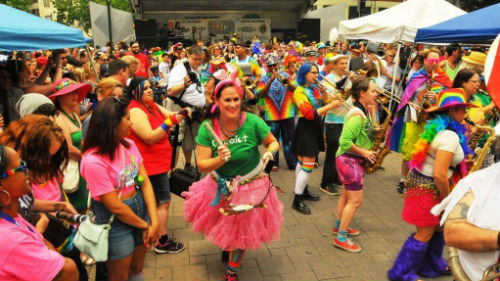 If you are a reporter seeking up to the minute information about measures in Arkansas, please email press@hrc.org and/or subscribe to our daily tipsheet.

In an unprecedented effort to bring equality to Arkansas, HRC launched Project One America, a comprehensive campaign to dramatically expand LGBTQ equality in the South through permanent campaigns in Alabama, Mississippi and Arkansas. Project One America is the first of its kind campaign to work exclusively in Arkansas. While there are no non-discrimination protections for LGBTQ people at the state or local level in employment, housing or public accommodations in Mississippi and Alabama, there are currently six municipalities in Arkansas that have passed limited measures to protect LGBTQ residents.

Click Here to Voice Your Support or text ONEARKANSAS to 472472 to join us.

Are you a faith leader in Arkansas? Pledge to make your community and congregation a more inclusive space for LGBTQ people by clicking here!

Paid for by Human Rights Campaign PAC (www.hrc.org) and not authorized by any candidate or candidate’s committee.

Marriage Equality & Other Relationship Recognition
State issues marriage licenses to same-sex couples.
School Anti-Bullying
State has a law that addresses harassment and/or bullying of students based on sexual orientation and gender identity.

Gender Marker Updates On Identification Documents
State has laws or policies that facilitate a gender marker update on driver’s licenses only.